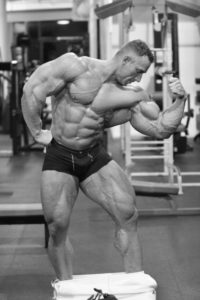 Big Jacks! Pythons! Meat Hooks! Big Guns! No matter how they are referred to, huge arms remain the most popular goal among bodybuilders. Everyone has their little secrets on how to attain them – high reps, slow tempo, pre-exhaustion, and so on – but few are satisfied with their present rate of growth. Here I will share with you five effective ways to upgrade your appendages based on two overlooked training principles: variety and accumulation-intensification alternation.

The neuromuscular system adapts very rapidly to the stress of training loads, which is why variety is a critical factor for maximizing the training response. In other words, variety eliminates the physiological causes of stagnation as a result of over-emphasized specialization.

If you study the strength training programs of athletes from Eastern Bloc countries, you’ll find that various forms of variety are included about once every two weeks. After two weeks, any single strength training program loses its efficiency. Coaches from these countries will frequently change set/rep schemes, exercises, and the speed of contraction (tempo). Unfortunately, in North America, few in the Iron Game are aware of this fact, which is why the programs they follow often produce less-than-optimal results.

With that background, here are five of my favorite strategies to quickly achieve maximum arm growth:

According to famous West German strength expert Dietmar Schmidtbleicher, strength potential is achieved faster if you force adaptation through volume (accumulation phase) and then stimulate it through intensity (intensification phase). By alternating volume and intensity as training stressors in this manner, you reduce the likelihood of overtraining and force a higher training response.

Training methods best suited for accumulation work include burns, giant sets, tri-sets, forced reps, staggered sets, descending sets, and pre-exhaustion. In this phase, the volume and the duration of the training stimulus are of prime importance. This necessitates performing a minimum of 10 reps per set for 3-4 sets per exercise, using 3-4 exercises per body part.

Training methods best suited for intensification work include eccentric work, stop-reps, partial work in a power rack, forced negatives, wave-like loading, stutter reps, slow tempo reps, isometronics, and electrostimulation. In this phase, intensity is the key factor used to elicit a training response. The aim is rapid strength gains; therefore, no more than 8 reps per set are performed. Because the number of sets needed to obtain a training response is inversely proportionate to the number of reps, normally 4-5 sets are performed per exercise. Two exercises per body part should provide ample stimulus in this training phase. 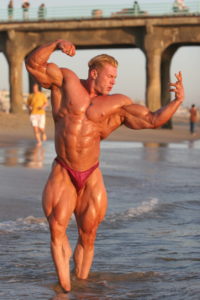 Dennis “The Big Bad” Wolf won the prestigious 2014 Arnold Classic and placed third in the 2013 Mr. Olympia. Wolf’s symmetrical physique is highlighted by the balanced development of his biceps and triceps. (All photos byMiloš Šarčev)

Soviet National Weightlifting Coach A.K. Worobjow recommends the following proportions among the different types of contractions for optimal strength development: 70% concentric, 20% eccentric, and 10% isometric. These proportions can easily be applied to bodybuilding workouts.

— Induces more strength and hypertrophy gains than concentric or isometric methods alone. The higher levels of muscle tension associated with this method allow athletes to break through strength-gain plateaus.

— Impacts not only the muscle but also the nervous system. It accomplishes these benefits because very high loads are used.

— Allows for the use of specially-designed equipment to increase eccentric loading. Nautilus had one line of machines that enabled the user to press a footpad to help lift a weight that the user could not lift on their own concentrically.

— Enables more work to be performed after the trainee reaches concentric muscular failure. At the end of a conventional concentric 4-6 RM (repetition maximum) set, additional eccentric work can be performed by adding 25-30 percent more weight and performing eccentric-only reps. As an alternative, a training partner can manually apply resistance for the eccentric portion instead of adding weight; however, it is vital to be able to control the descent of the resistance selected or an injury may occur. 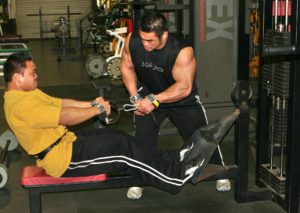 There are many ways to perform eccentric training. One is to have a training partner help with the concentric motion to lift a weight they could not lift otherwise, as shown here with this seated cable row exercise.

Even though eccentric training shows great potential for strength improvement, a few precautions must be addressed:

— Athletes should only begin eccentric work after 1-2 years of developing a solid base in strength training.

— Due to the high levels of muscle soreness associated with eccentric training, workout frequency is limited to once every 7-10 days. This training frequency is necessary because eccentric exercise severely hampers recovery ability.

— It often requires the help of 1-2 partners, or special equipment, to lift the resistance in the concentric range. Specific arm exercises, however, can be performed eccentrically without such assistance. An example is performing the one-arm Scott curl in which the free arm is used to assist with the concentric motion. Similarly, you can also hang power clean a barbell to perform eccentric reverse curls.

Isometric contractions are commonly prescribed in the training of wrestlers and gymnastics rather than bodybuilders, but they can also be used to break through strength-gain plateaus. Because 10-15 percent higher levels of force can be produced with isometric contractions, this form of work can be used periodically to increase in strength levels. You can implement isometric work with the following methods:

— Performing a functional isometric contraction after pre-fatiguing the muscle with 4-6 partial reps; a power rack is needed with this method. After a regular warmup, select a weight you can move from one set of pins to another (for example, from mid-thigh to waist level in barbell curls). Perform 4-6 RM, and at the end of the last concentric repetition, contract your muscles isometrically with maximal tension against the top pins for a count of 6-8 seconds. Lower the barbell and attempt another rep; if you can complete an additional rep, the weight was too light.

— Prolonging the intensity and duration of a conventional set carried to concentric muscular failure. For example, after completing the last concentric portion of a 6 RM set of barbell curls, lower the barbell 30 degrees, stop for a count of 8 seconds, and repeat the process at two other angles. This method produces greater muscular fatigue than with a conventional set.

— Performing isometric stops in the dynamic range of a movement. For example, 6-second isometric stops can be incorporated at various points in dips: at the bottom position, at mid-point, and 30 degrees before lockout.

— Performing functional isometric contractions at various points in the range of motion to focus on specific points of the force curve.

It’s important to understand that speed of contraction has a specific training effect on the neuromuscular system. For example, training at slow speeds has a definite advantage over high-speed lifting for the development of maximal strength because moving heavy loads at slow speeds reduces the utilization of momentum to assist with lifting the resistance. Slowing down the movement (3-10 seconds for each concentric and eccentric portion) augments both the duration of the stimulus and the levels of tension imposed on the muscle, favoring faster development of strength and muscle mass.

Training at high speeds should be reserved for high-repetition sets. A slow velocity of execution is associated with the production of high forces; in contrast, high-velocity movements favor high levels of neuromuscular output. As such, a weight that is light enough for power training is probably not heavy enough for strength training.

For the first year of strength training, European weightlifting coaches recommend the use of slow-to-moderate lifting tempos. For aspiring bodybuilders, training the arms at slow speeds is best accomplished using exercises where the resistance is constant, such as with pulley work. 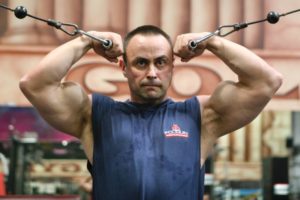 Pulley exercises provide constant resistance. As such, they are ideal for training methods that use slow-to-moderate tempos.

It’s true that the order of motor unit recruitment is fixed for a muscle for a certain movement, even if the rate of force development and the speed of contraction change. However, by changing your body position – or in the case of a multi-functional muscle performing different movements – the order of recruitment can be changed.

Certain motor units within a muscle have a low-recruitment threshold for a particular exercise and a correspondingly high-recruitment threshold for another exercise. Variation in recruitment order according to movement pattern may be partially responsible for the specificity of training that has been observed. It may also support the notion, long held by bodybuilders, that full development of a muscle is possible only when it is exercised in all its possible movements. For example, changing the width of the grip will recruit different motor units, thereby leading to accelerated development.

To this end, there are a wide variety of arm exercises available to the bodybuilders; curls can be performed seated, standing, inclined, lying, or even kneeling. They can also be performed with a variety of equipment—barbells, dumbbells, cables, EZ Curl bars, Scott bench, spider bench, and so on. Even the thickness of the grip (bar) can be changed for added stimulus. 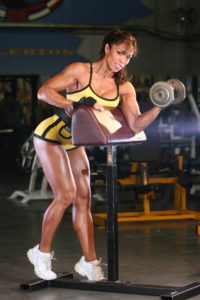 Changing body position changes the order of motor unit recruitment. Scott curls, for example, increase the work of the first third of the strength curve of the elbow flexors.

The brachialis muscle is known among kinesiologists as the workhorse of elbow flexion. That is, it is involved in all elbow-flexion movements, whether the forearm is pronated, supinated, or semi-supinated (neutral). Picture Arnold’s back double biceps pose. The brachialis muscle is the muscle shaped like a golf ball that you can see between his biceps and triceps. 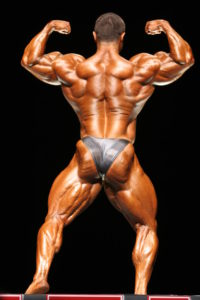 When well-developed, the brachialis muscle is shaped like a golf ball, positioned between the biceps and triceps. It is often neglected in arm training workouts.

When the forearm is supinated (palms-up grip), the biceps have an effective line of pull. When the forearm is pronated (palms-down grip), the biceps is rather ineffective in flexing the elbow. This is why you normally handle 35 percent less in reverse curls than you can use in barbell curls. When your forearm is pronated, the brachialis takes the brunt and pulls the resistance almost alone. If you don’t already perform one of the various forms of reverse curls as part of your workout, adding them could result in a half-inch to a one-inch of arm growth in just one month!

There are many ways to add variety in bodybuilding workouts to stimulate rapid arm growth, such as the five I shared with you in this article. Because training response is the result of a disruption caused by a training stress, it seems only logical to frequently create disruption in your training to stimulate the supercompensation processes. Besides, training doesn’t need to be boring. As the saying goes, “Variety is the spice of life!”