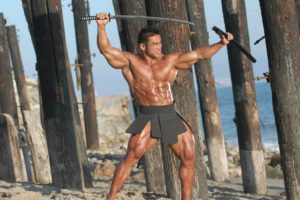 How to use the Kaizen philosophy to make gains every workout!

Regardless of where you are in the bodybuilding hierarchy, from novice to professional, I’d like to introduce you to a training philosophy that will improve the effectiveness of virtually any workout.

Anyone who has been training for a long time eventually reaches a point of diminishing returns, making it difficult to produce even a five-pound increase in a particular exercise. For some reason, you just can’t seem to reach that next personal record, at least not as quickly as you are accustomed to doing. Say, for example, your personal best in the bench press is 5 reps with 245 pounds, but when you try 250, you get stuck at 4 reps for several weeks. Although the increase is only five pounds, it’s still too much. The problem is even more pronounced – and frustrating – with exercises that use smaller weights.

When performing rotator cuff exercises (such as external rotation of the shoulder with a low pulley), you may be able to perform 10 reps with 10 pounds on one exercise. When you increase to 15 pounds, however, you may not be able to complete a single rep! And with sectorized exercise machines, often the only progression with heavier weights is by 10- and 20-pound increments, which means you may—seriously—be stuck on the same weight for months! 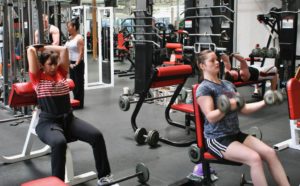 Beginners may struggle using dumbbells and exercise machines that have large, incremental increases. (This photo and lead photo by Miloš Šarčev)

Excessive weight increases were a major problem in weightlifting when women began competing. In the early days of the sport, the women had to follow the same rules as the men, and the rules demanded that the athletes increase the weights by 5 kilos (11 pounds) between their first and second attempts. That may not seem like much, but it is when you take a closer look.

If a female weighs 100 pounds and is trying to snatch her bodyweight in a competition, she would most likely start with 85 pounds for her first attempt. For her second attempt, she would have to jump to at least 95 pounds. Considering bodyweight, that lifting scenario is the equivalent of an elite male weightlifting trying to snatch 300 pounds, going from 255 to 285 after the first attempt, a jump most coaches would say is excessive. As an analogy, can you imagine how progress in the 100-meter dash, or for that matter any running event in track and field, would be affected if all world records had to be broken in increments of .5 seconds? Weightlifting, by the way, eventually resolved this problem by allowing smaller jumps between the first and second attempts. 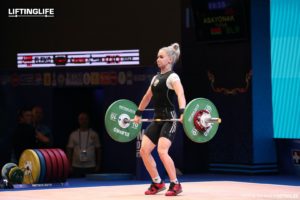 Weightlifting rules were modified after women entered the sport. Now, rather than having to jump 5 kilos (11 pounds) after their first attempt, they can jump as little as 1 kilo (2.2 pounds). (Tom Scott photo @liftinglife.)

In the Japanese language, the word Kaizenmeans “constant and never-ending improvement.” This word is used in all areas of Japanese life – relationships, learning judo, or improving the balance of trade. The point here is that the Japanese look for constantand gradualimprovement. The Japanese believe very small refinements, made daily, compound with interest to bring about long-term progress. Interestingly, there is no equivalent word in English for Kaizen. 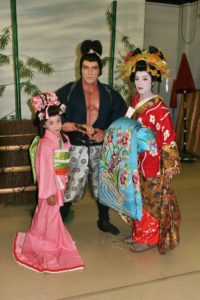 By following the Kaizen philosophy, Japan progressed from being a war-torn country to a dominant economic power. Kaizen also describes how the legendary Greek wrestler Milo of Croton built his tremendous strength and physique.

For you newcomers to the weight training scene, Milo purportedly carried a calf every day until it was a full-grown bull. Although the Milo story may itself be a bunch of bull, such an approach to training can help you achieve your goals. Pat Riley of basketball fame used Kaizen. Instead of asking his team for significant increases in one aspect of the game, he asked every player to increase each skill level by only one percent. Multiply the number of skills by the number of players, and you can understand his secret of success.

Applying the Kaizen method to weight training means that instead of making a jump of 5 pounds, you can make an even smaller jump, such as by just one pound. This difference in loading makes the weight both physiologically and psychologically easier to handle. The Bigger Faster Stronger (BFS) organization uses the idea of making personal records to help motivate kids, and their programs often promise that you can “Break 10 personal records a week!” Although the BFS program is primarily marketed to middle school and high school kids, with Kaizen, such results are possible at any age. Imagine: If you could increase the weight for reps for a particular exercise by half a pound a week, it would represent a 26-pound gain in a year! Gets you psyched, right?

You can apply Kaizen to your training by using a combination of kilo and pound plates, and the EZ bar solid collars. For example, 1.25-kg and 2.5-kg plates weigh 2.75 and 5.5 lbs respectively, and an EZ bar collar weighs about 1.5 lbs. If the base weight on the bar is 225 pounds and your personal best for 1 rep is 240 pounds, you can apply Kaizen by increasing the weight in the following manner: 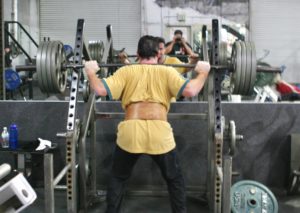 Kaizen can be performed even with exercises that use heavy weights, such as squats. (Miloš Šarčev photo)

The easiest way to apply Kaizen is to purchase magnetic add-on weights, such as the ones sold by Benoit Built, Inc. The idea was inspired when its inventor, Ken Benoit, injured his biceps performing a heavy dumbbell curl on a Scott bench. During his rehabilitation, Ken made the painful discovery that the standard 5-pound increase in dumbbells put excessive stress on his injured arm.

By duct-taping 1.25-lb weights to each end of a dumbbell, he was able to achieve a 2.5 increment that allowed him to progress in his rehab steadily and safely. Later on, he came up with the idea of using magnetized plates to save the time and hassle of taping weights to his equipment. The product was first used in gyms in the New England area. At my request, Ken made even smaller magnetized disks so they can be used when training smaller muscles with poor leverage, such as the rear delts and the rotator cuff muscles.

Another benefit of having these magnetic weights is you can correct the weight of poor-quality weight plates. For example, if you have a 25-lb dumbbell that weighs only 23 pounds, you can add on a 2-lb plate to increase it to the standard of 25 pounds. Although two pounds may not seem like such a big deal, often a subconscious-feared injury occurs when you realize that your weights don’t weigh accurately, because this fear can disrupt your concentration when you lift.

There are other practical uses for the Kaizen method if you have access to the add-on magnetic weights. I can see how it can be useful when performing drop sets, modifying strength curves, and using wave-loading cycles, as follows:

Drop Sets.With drop sets, you perform as many reps as possible with one weight, immediately proceed to the next lowest available increment, and then complete as many reps as you can with that weight. This process usually continues for a least one more set. This method exhausts a greater percentage of the muscle fibers and gives you a great pump! The problem with performing drop sets with dumbbells is that you must have access to several sets of dumbbells. With an adjustable dumbbell, this procedure could take several minutes, preventing you from properly using this technique. With the magnetic weights, all you have to do is peel off the additional weight, which takes about a second.

Another problem is that with certain exercises, especially those that use small muscle groups, the normal five-pound drop in weight may be too much – so you end up performing too many reps to achieve the desired training effect. This is especially true on the third and subsequent drop sets. Magnetic weights will enable you to use the exact amount of resistance to produce the optimal training effect.

Modifying Strength Curves.One of the problems I encounter with many exercise machines is that they often have poor strength curves. The lying leg curl machine is one example. On most of these units, the weight is easy to lift at the beginning of the exercise and virtually impossible to complete at the end of the range of motion. You often end up using the heaviest weight at the beginning of the movements and are forced to use momentum to complete the exercise. Thus, regardless of the weight selected, you only effectively overload the beginning of the movement. By adding a magnetic weight plate to the lever arm of the machine, you can modify the resistance curve of the machine to be more in line with the natural strength curve of the hamstrings, enabling you to effectively overload the muscle through its entire range. 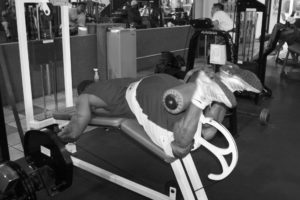 Adding magnetic weight plates to the lever arms of many exercise machines can change the resistance curve to match the strength curve of the muscle being worked. (Miloš Šarčev photo)

Wave Loading.With a wave-loading cycle, you work up to a maximum weight for a specific number of reps, back down in weight for one or more sets, then work your way up to even heavier weights. Especially effective with elites athletes, this method allows you to handle heavier weights than you could otherwise.

I saw an elite weightlifter use this method with front squats. On his first “wave” he managed 350 pounds; after several waves, he lifted 413 pounds! Although you would think an athlete would be tired after the first wave, what happens is that this “undulation in intensity” stimulates the nervous system to allow heavier weights to be used as the workout progresses.

To show you how this method can be used, let’s say a male powerlifter can bench press 400 pounds. His wave-loading cycle, resting 3-5 minutes between each set and each wave, for one workout might progress as follows:

Now try wave loading with Kaizen! Using the magnetic weights, this athlete could have lifted 400.5 pounds on the second wave, establishing a new personal record. This improvement, although small, might psych himself up even more that the 405 pounds on the next wave.

Kaizen can bring security to your training life, enabling you to improve in some way every single training day. Don’t worry about maintaining the quality of your workouts if every day you are working on improving them. Long live Kaizen!