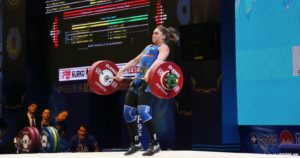 It’s commonly accepted that you should lift weights under full muscular control, pause momentarily in the contracted position, and lower the weight under control. Simple advice to be sure, but is that all we need to know about this subject? Will this protocol work for every bodybuilder, regardless of his or her level of experience? Every football and tennis player? Every fitness enthusiast, from guys training to lose five pounds off their guts to the hard-body women training for figure and physique competitions? Unless you’re willing to settle for mediocre results, the answer is no!

Determining the appropriate speed of contraction for an exercise is one of the most ignored variables in resistance training. Telling everyone in the gym to lift super slow may reduce a gym owner’s risk of getting sued by the Joe Lunch Pails who can’t control their weights, but it’s not the single best way to train. There is no single best way to train. The human body is an especially adaptive organism that responds best to variables in training — one of these variables is training speed.

I’ve drawn upon credible research and empirical evidence from the athletes I’ve trained. This includes long-term research from European and American exercise scientists and covers athletes from a variety of sports, including bodybuilders, Olympians (from the Olympics, not the Olympia), and world-record holders.

The first thing you must understand to reach your goals is that lifting speed influences the training effect. Let’s say two guys decide to perform 10 reps in the dumbbell row. One lifts slowly, up to the count of three and down to the count of six, and the other cranks on the dumbbell handle as if he were starting a lawnmower. Doesn’t it make sense that they would achieve different training effects? Of course, and one reason is that although both are performing the same number of reps, the lifting speed is affecting other loading parameters. For a bodybuilder, one of these loading parameters is “time under tension,” which is the amount of time the muscles contract to complete a set.

Two athletes could perform identical exercises for the same number of reps, but produce different training stimulus if the speed of execution is not addressed. (Lead photo of US weightlifter Maddie Rogers by Tim Scott @liftinglife.com; this photo by Miloš Šarčev)

To develop maximum muscle mass, the optimal amount of time a muscle should contract during a set should fall between 20-60 seconds. This exercise prescription includes a lot of variation, from a set consisting of one rep and lasting 60 seconds, to multiple sets of 15 reps and lasting 60 seconds. I don’t mean to suggest that bodybuilders should never perform shorter or longer sets, rather that the majority of their sets should fall within this range.

To get the appropriate training stimulus, you must prescribe the right speed of movement for all aspects of the lift. The following table is an excerpt from the training diary of Pierre Lueders, 1994 overall World-Cup winner in the bobsled. The chart details a 3-week program for leg and lower back strength and shows how I prescribed various lifting speeds. Besides his athletic achievements in bobsled, at a bodyweight of 220 pounds, Pierre power cleaned 352 pounds and did a rock-bottom front squat with 462 pounds.

Take a look at the chart. Week, sets, and reps are easy to figure. Tempo is the speed of your lift (what this article is about!). It’s always expressed in four digits, a formula created by Ian King, Australia’s leading strength coach. King came up with the first three digits, and I refined it by adding a fourth.

The first number is the lowering (negative) portion; the middle digit is the pause (isometric, disadvantage leverage position) phase; the third digit is the return (positive) movement; and the last digit is the pause in the finished position (isometric, advantage leverage position). Using the front squat example below, three refers to the three seconds it should take the lifter to squat down; two refers to a two-second pause at the bottom; one refers to the one second it should take the lifter to return to the start, and the final 1 is the pause before the next rep. X is used to denote “as fast as possible.” Rest, represented in seconds, is how long the lifter should rest between sets.

The pause is an often-neglected component of lifting speed. It’s been shown in the bench press that pausing four seconds on the chest will dissipate virtually all the plyometric effect in a heavy lift. In fact, in a bench press competition, an extra second delay for the judge’s clap could make a five percent difference in the amount of weight lifted! In contrast, a bodybuilder would want to make use of long pauses in his or her training because the muscles must contract harder when the plyometric effect is reduced. 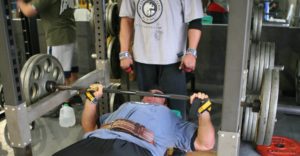 Pausing during a lift, such as by performing dead stop bench presses in a power rack, increases the work of the muscles. (Miloš Šarčev photo)

For the development of maximal strength, slow-speed training performed with heavy weight has a definite advantage over high-speed lifting. Slowing down the movement increases both the duration of the stimulus and the level of tension imposed on the muscle – factors that favor the development of strength and muscle mass. (High intensity, slow-speed training, which could be indicated by exercise prescriptions such as 4 x 4-6 on a 4-1-6-1 tempo, will produce the following muscle-building effects: stimulation of the Type IIa fibers, and increased muscle glycogen, CP, ATP, ADP, creatine, phosphorylase, PFK, and Krebs, cycle enzyme activity – all of which equate to more strength and power!)

Two studies have shown the superior value of varying speed over keeping the speed of contraction consistent throughout a program. A study by Urdange (1989) showed that to increase poundage at both high and low speeds, training must be performed at both speeds.

The work of Doherty (1989) states that low-velocity training produces greater increments in force production at low speed than high-velocity training. However, their study suggests that high-velocity training alone doesn’t produce changes as great as varying low- and high-speed training performed in sequence. This data supports the practice of training programs in which the speed of movement is varied over the course of the program for athletes attempting to increase strength at high speeds.

For elite athletes, the variation of training speeds may be more necessary to elicit a training response. Various world-class athletes have reported enhanced performance from systematically planned variations in speed of contraction. For example, in hammer throwing, low-velocity work (i.e., slow-tempo deadlifts) has been beneficial for enhanced control of knee and trunk flexion during turns, and high-velocity training (i.e., weightlifting movements such as the snatch) will enhance power in the release of the throwing movement.

The key in power training for athletes is to keep the repetitions low (1-5) so high-threshold motor units are recruited. Training with higher reps (i.e., 10-12), even while concentrating on acceleration, would still access lower threshold fibers. 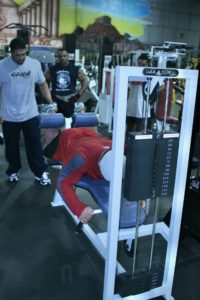 Because many resistance training machines do not allow for rapid acceleration, they can adversely affect the development of power.(Miloš Šarčev photo)

While strength training at higher speeds is specific to the movements that occur in most sports, this type of training must only be performed after obtaining a solid base of maximal strength. Telling a kid with biceps as big as his wrists to perform high-speed power cleans is not only potentially dangerous, but it’s also an ineffective way to train. Eventually, many athletes could get great results from these types of exercises, but they should first develop a base with slow-speed work. Then they must continue to use slow-speed movements throughout their athletic career to ensure continued progress.

For a bodybuilder, one secret to success is to manipulate training speeds to create maximum muscle tension. Thus, slow-speed exercises should be emphasized over fast speeds because they make the muscles work harder by eliminating the use of momentum. However, as I’ve stressed, slow-speed training should never be the only training speed employed. Muscles require a variety of stimuli for optimal results, and using different training speeds is one way to fulfill this need.

Now, go get big fast, but don’t forget the slow!