Most of the people I talk to are interesting in gaining large amounts of muscle mass or functional strength. This is best accomplished by concentrating the bulk of the training on leg and back exercises. One machine that can target these muscles effectively is the reverse hyper machine.

I first got to try one out while coaching the Canadian Bobsleigh Team in Innsbruck, Austria. After coaching my athletes, I stayed at the gym to do my workout. Since the gym was so busy, I had to share the equipment with two of the local powerlifters who held a few national titles. There, in the corner, was a reverse hyper machine.

The Austrian powerlifters swore that it helped improve their deadlift and squat performances. Both athletes claimed that it made a difference between 35 kg (77 pounds) and 50 kg (110 pounds) on their respective squats and deadlifts. Even though I had seen the machine advertised in Powerlifting USAmagazine, I had never paid any attention to it until I tried it. I jumped on it and pumped away. The movement felt quite right since the glutes, hamstrings, and erector spinae were being trashed by the machine. After my workout, I went to inquire about it.

This device is the brainchild of Westside Barbell Club owner and powerlifting coach extraordinaire Louie Simmons. The machine has helped make many world records in the deadlift and squat possible, and it’s a staple of Louie’s deadlift training. To gain more insight on the possibilities of this type of training, I made the trip to Columbus, Ohio to meet with Louie.

Louie is better known in the Iron Game community for his powerlifting successes, both as a coach and an athlete. He has also achieved world-renowned status as a strength coach. Louie Simmons first used the reverse hyper to rehabilitate back injuries incurred over a lifetime of heavy lifting. Interestingly, the injury that prompted the development of the reverse hyper machine was caused by a loss of concentration during a five-rep set of good mornings using 435 pounds!

While physicians recommended surgery on several occasions, Simmons turned his back on the knife and used the reverse hyper to repair the damage and alleviate the pain. To quote Louie, “So far, over two dozen people with bulging or herniated disks have used my machine without pain. The machine decompresses the disks when the weights travel to a position under the face.”

He now uses it to create new world standards in the deadlift.

I had professional bodybuilder Milos Sarcev try the machine during a hamstrings-only workout. After doing five sets each on two different Atlantis leg curl machines, we hopped on the reverse hyper machine for three sets of 20 reps. Milos told me that he could feel it in the lower back and glutes, but not as directly in the hamstrings as the leg curl machines made him feel. By the next day, while he was limping to do a back workout, he had definitely changed his mind.

The reverse hyper machine is also excellent for improving posture and correcting abnormal pelvic tilt, which can immediately give the illusion of a flattened abdomen wall. One of the consequences of having weak erector spinae muscles is the development of a posture in which the upper back is rounded, causing the shoulders to droop forward and the chest to appear sunken. To maintain the center of gravity for this type of incorrect posture, the pelvis begins to thrust forward, ultimately causing a distended lower abdomen.

Together, the glutes, hamstrings, and erector spinae form what kinesiologists call the posterior chain. The posterior chain allows you to run at high speeds, or to jump either forward or vertically. So don’t waste your time on quads and calves development if you want rapid increases in your vertical jump. 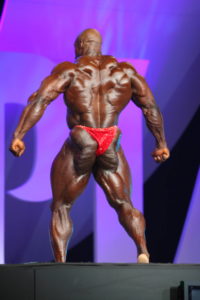 The glutes, hamstrings, and erector spinae form the posterior chain muscles. Ronnie Coleman, an 8x winner of the Mr. Olympia, displayed exceptional development in all these areas. (All photos by Miloš Šarčev)

The reverse hyper machine will allows you to work the posterior chain in a synchronized manner. Back extensions would target the same muscle group, but not in the same recruitment pattern. Another disadvantage of movements such as back extensions is the dizziness associated with their performance.

Bobsleigh Olympic gold medalist and Overall World Cup Winner Pierre Lueders purchased a reverse hyper for himself, and it allowed him to increase his squat by a 50 pounds over the summer of 1996. Success leaves clues!