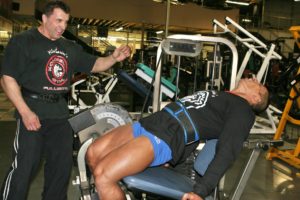 A closer look at this controversial exercise

The leg extension machine is one of the most widely-used pieces of lower body equipment, available in nearly every commercial gym in the country. Here are four reasons why:

2) The belief that isolation exercises are better than compound exercises.By rationalizing (i.e., rational lies), they can repress their feelings of guilt for avoiding demanding, gut-wrenching exercises such as squats.

3). Propaganda.The early 70s, with its “machines-are-better-than-free-weights” advertising launched by the many machine manufacturers, made gym owners jump on the bandwagon and purchase these machines.

4) Because they take no skill.You can be a motor moron and still be able to do leg extensions. Although the quads are worked when you perform leg extensions and you can do them one leg at a time, this exercise does not match any daily life activity. 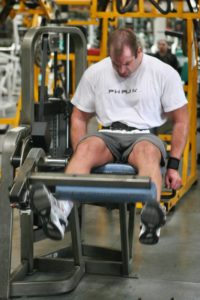 Because the leg extension machine is stable, the user can train one leg at a time. (All photos by Miloš Šarčev)

The leg extension is a so-called “open-chain exercise,” which means the resistance encountered is overcome by the force applied by the working extremity. In this type of exercise, the recruitment patterns of the muscles and kinematics of the joints are completely out of phase with a close-chain activity, such as squatting or walking.

During squatting or walking, your femur (the long bone of the thigh) moves across your tibia (the inner of the two bones between the knee and ankle). The body must balance its center of gravity over the base of support at all times, which requires force-coupled actions from a variety of muscle groups.

Because of the fixed, stable position offered with the leg extension, there are numerous stabilizer, neutralizer, and antagonist muscles that are not recruited. The leg extension is one-dimensional, and the brain can disproportionately recruit prime movers over stabilizers and neutralizers. Excessive use of leg extensions causes off-set strength ratios in the stabilizer muscles compared to the prime movers. The result is functional deficits, which gives me more business rehabilitating professional athletes.

Leg extensions are often used in knee rehabilitation. However, when you perform a leg extension, there is minimal activation of the hamstrings and maximum activation of the quadriceps. This makes it very hard on a reconstructed knee because of the massive sheer forces you are creating in the anterior cruciate ligament, one of the stabilizing ligaments of the knee.

For those with knee injuries who cannot squat, rather than leg extensions, they should embark on a step-up and split squat program. Within a short amount of time performing this type of workout, they are often able to squat again. 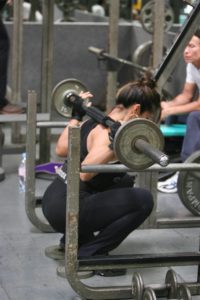 For unlimited lower body development and strength, athletes should strive to perform full squats. Placing small weight plates under the heels can help those with ankle restrictions until the condition is corrected.

Before pursuing a squat/step-up program, be certain your biomechanics are functioning properly. For example, if you are overpronating (lifting the outer edge of the foot), you will create stress on the knee from increased internal rotation of the tibia. You will notice that as you bend your knee, it will cross the midline and you will try to compensate by bending more at the hips. The solution is to obtain corrective orthopedic devices. Orthotics will not only reduce unwanted stress on the knee and ankle joints, but will also improve the efficiency of your squat. Translation: increased strength and more symmetrically-balanced quad development. Also, for those with ankle restrictions, putting small weight plates under the heels can help until full range of motion is obtained.

For those of you who have no knee problems and want to perform leg extensions, select a machine where the primary overload occurs during the mid-range of the movement. And when you use it, do so sparingly.