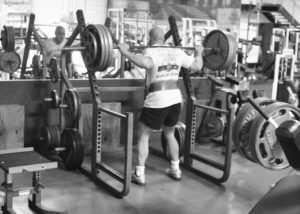 A powerful method to jump start your training

I often get questions about what to do about training plateaus, especially with the squat and the bench press. I found one way to get your training progress on the upswing again is with a method called “Heavy Supports.”

It’s my understanding the method was developed by Chuck Sipes. Sipes won the 1959 Mr. America, the 1960 Mr. Universe, and placed second to Sergio “The Myth” Oliva in the 1967 Mr. Olympia. Sipes was known not just for his remarkable physique, but for his amazing strength.

At a height of 5’9 ½” and a bodyweight of 220 pounds, Sipes possessed impressive 19 ½” arms and freaky 18” forearms. He reportedly could bench press 570 pounds (and these were the days without supportive gear), and his strongman act included bending 60-penny steel spikes in his bare hand and bending steel bars between his teeth! 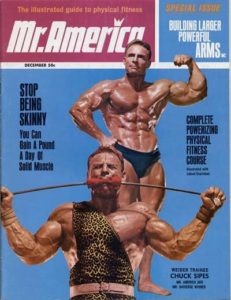 Chuck Sipes, a champion bodybuilder credited with developing the heavy supports method, was as strong as he looked!

Heavy supports method became popular with weightlifters in the 60s and early 70s. Weightlifters would set the pins in a tall power rack at a height set to work on their lockout for the jerk (and the Olympic press when it was contested). It was not uncommon for an athlete to use 100 or more pounds over their maximal result in these lifts. Powerlifters also often use heavy supports to up their squat and bench press results. Part of this effect was psychological, as performing heavy supports with squats and bench presses made maximal weights (performed through a full range of motion) feel less challenging when they removed the barbell from the supports. 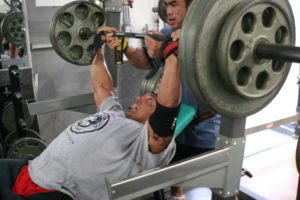 Heavy supports can be performed for many types of pressing exercises. A spotter should always be used, and the lift performed inside a rack with safety catches. (This and lead photo by Miloš Šarčev)

Sipes claimed heavy supports build tendon strength, but it’s primary benefit is that it heighten the shutdown threshold of the Golgi Tendon Organ (GTO), which is a tension/stretch receptor located in the tendon.

The GTO inhibitory effect can be seen when two people of unequal strength arm wrestle. As the weaker person loses, it looks like he or she is suddenly quitting and gets their wrist slammed on the table. What’s really happening is that the GTO perceives a rapid rate of stretch during the eccentric contraction, at which point it shouts to the brain, “Shut down, or this opponent is going to rip your biceps apart!” The brain then sends a rapid signal to inhibit the contraction of the biceps to prevent a muscle tear.

I recommend performing heavy supports with a spotter, even when lifting inside a power rack or half rack. Performing a heavy support bench press without a spotter or a rack with safety supports is just asking to be dead.

If your training progress has slowed or stopped, or you’re looking for an effective method to shock your body into new levels of strength and muscle growth, I’ve got just the workout. With this system, you raise the GTO threshold by interspersing 8-second heavy isometric holds (i.e., heavy supports) between regular sets. A squat workout may look like this, resting three minutes after each set:

Set 2: Heavy support, 8 seconds at 200 percent of max – in other words, twice your max for one rep. This lift could be described as a 1/16thsquat as you unrack the weight and hold an upright position with your knees just short of lockout. The weight should make your knees quiver.

Don’t be surprised if your heavy support maxes climb up dramatically. And don’t be shy to use even greater percentages for the heavy supports than those suggested (as long as you can safely control the weight, of course).

Try heavy supports, and you’ll gain greater confidence and find that you have more control over heavy poundages. These benefits will increase your rate of strength development and help you blast through training plateaus.