“A Brief History of Time” by Stephen Hawking is a coffee table book in the sense that many people bought it to impress their friends, but never read it. The same could be said about “Supertraining,” which is unfortunate because it’s one of the most important textbooks on the science of resistance training.

The latest edition of this athletic fitness training classic is “Supertraining: Sixth Edition – Expanded.” It was written by sports scientists Mel Cunningham Siff, PhD, and Yuri Vitalievitch Verkhoshansky, PhD. The previous versions of “Supertraining” were under 500 pages, but this one finishes at 578 thanks to an expanded section on plyometrics and an extensive index missing in earlier editions. 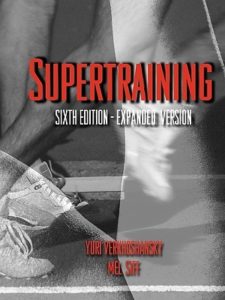 To understand why “Supertraining” is such a remarkable book, you need to consider the background of the authors.

Verkhoshansky is best known as the Russian track and field coach who developed plyometrics, specifically an advanced form that he referred to as the “Shock Method.” He developed this type of training out of necessity, as his attempts to overload the legs of his jumpers with heavy partial squats were causing lumbar spine injuries.

In 1964 Verkhoshansky published his first research paper on plyometrics, but his body of work included over 500 scientific papers that were translated into 22 foreign languages. Much of his work on plyometrics was translated into English, and his ideas were put into practice at first by American track coaches, and then expanded to other sports.

Siff is a native of South Africa who has a PhD in physiology and a masters in applied mathematics. He served many years as a professor of mechanical engineering at the University of Witwatersrand in Johannesburg. Siff competed in karate, trampolining, track and field, powerlifting, and weightlifting. He was a national coach in weightlifting and could perform a standing Olympic press of 275 pounds at a bodyweight of about 200 pounds. Siff often trained with the Belgian behemoth Serge Reding, the first man to snatch 400 pounds and the second to perform a standing Olympic press of 500 pounds. He reportedly squatted 880 pounds for 5 reps and performed multiple jumps a foot off the floor holding 286 pounds!

Scientists from around the world often came to South Africa to work with Siff. He spent a considerable amount of time researching electromuscular stimulation (EMS), a method Reding believed helped him achieve his
greatest gains in strength.

Siff was especially impressed with the work of Russian sports scientists, but he said American translations of their work were often poorly done (often by a single person, such as a grad student). For example, here is a passage from an English translation of Verkhoshansky’s textbook “Programming and Organization of Training”:

“Indispensable conditions of training organization which provide extensive and relatively prolonged disturbance of homeostasis, are the precise dosage of loading, as well as rehabilitation stages necessary for triggering a compensatory reaction, elimination of the hetero- chronicalness phenomenon in the dynamics of the various functional indicators and stabilization of the organism at the new functional level.”
Got that?

In contrast, East Germany formed teams of scientists and linguists devoted to properly translating Russian research so that their sports coaches could apply this knowledge to developing superior athletes. For many years, East Germany was a powerhouse in Olympic sports due in part to their advanced training methods.

Eventually, Siff teamed up with Verkhoshansky to produce the textbook “Supertraining.” It was first published in 1993 and covered the theory and application of sports science research. The current edition, published in
2009, is divided into these nine sections:

“Supertraining,” dispels many of the myths about weight training found in popular bodybuilding and general fitness magazines. Here are 10 gems from the book:

Fallacy 1: Lunging and squatting are dangerous if the knees move in front of the foot.
Fallacy 2: Seated exercises are safer than standing.
Fallacy 3: Calf raises on machines are the best way to develop the calves.
Fallacy 4: Machines are better than free weights.
Fallacy 5: The arms should not be raised past horizontal during dumbbell laterals.
Fallacy 6: The pec dec is a safe isolation exercise for the muscles of the chest.
Fallacy 7: Wrist curls are the best exercises to develop the forearms.
Fallacy 8: Static stretching is the best type of stretching.
Fallacy 9: Seated back machines place less stress on the lumbar spine than deadlifts.
Fallacy 10: You should be able to squat 1 ½ times your bodyweight before performing depth jumps

Take Fallacy 4, for example. Siff and Verkhoshansky say those who make exercise machines often “treat the body as a machine, when in fact the primary principle of all muscle training is that all muscles are controlled
by a central computer, the brain. All training involves the central nervous system, so although the patterns of those machines may be similar, it is not analogous to the way the body behaves in free space or how the
central nervous system behaves controlling those movements.” There’s more.

“Supertraining” is not an easy read, but it’s a book that shouldn’t be left to collect dust on a coffee table. Be aware, however, that much of the material will have to be read several times to understand it, especially the
early sections that focus on anatomy, physiology, and biomechanics.

If you are a strength coach or personal trainer, you might prefer to start with Section 5, as this and the later sections focus more on practical applications of the theory presented in the first four sections. However you decide to use it, “Supertraining: Sixth Edition — Expanded” is a wise investment for those serious about understanding the science of strength and conditioning.

[You can purchase “Supertraining: Sixth Edition — Expanded” through Amazon.com and westside-barbell.com.]

For exclusive videos & articles from Charles Poliquin released every month, join the Dojo of Strength.