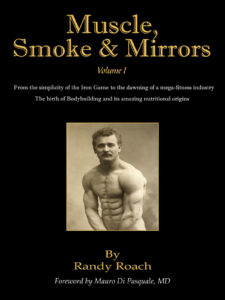 Why should Randy Roach’s Muscle, Smoke & Mirrors, Volume 1 be a part of your bodybuilding library? Consider the following testimony from
Charles Poliquin:

“This book is so well written and researched that it deserves to be a University textbook for nutritionists, exercise physiologists, and physical
educators.

“What I particularly liked about it is that Randy blends the knowledge of many sciences to explain the evolution of nutrition/supplementation
through the bodybuilding movement, from anthropology to Dr. Hawkins’s mapping of human consciousness. It also pleased me enormously to see finally in print, much credit given to Dr. Mauro Di Pasquale’s contribution to the nutrition world. Paradoxically, it is written by a blind man that brings a bright light to the facts and events that built the nutrition industry. A thousand thanks for a brilliant work of art and science.”

And here is what Di Pasquale said about it:

“Today’s universal obsession with a tight athletic body and performance can be traced back to bodybuilding. In fact, what we’re going through
today was conceived and delivered many decades ago in a sport that is so cutting edge that it took the world almost a century to catch up. Just how it all evolved is fascinating and spellbinding.

“Randy Roach is the ultimate historian, combining extensive research and interviews with both his vast knowledge of the sport and his obvious
writing talent. The result is a book that brings history to life and manages to be both informative and entertaining. Once you start to read this book,
even though it’s almost 600 pages long, you’ll find it difficult to put down.”

Now that we have your attention let’s take a closer look at your upcoming investment. First, as Di Pasquale said, it’s huge, about 2-inches thick in small type. It contains approximately 200,000 words about bodybuilding history and the supplement industry (as a comparison, consider that most bodybuilding magazine articles today are seldom over 800 words). It’s also heavily referenced—no fake news here!—and took this visually- impaired author five years to write.

Muscle, Smoke &amp; Mirrors: Volume I contains four major sections:
Physical Culture, The Iron Game, The 1950s, and The 1960s. Here are a few of the major celebrities in bodybuilding who are discussed:

No workouts are provided in Volume I, but Roach discusses how training evolved so that bodybuilders could reach the highest levels of muscular
development. In the early days of the sport, Roach says bodybuilders often used many of the same exercises as competitive weightlifters, such as the Olympic press. Roach explains how eventually these two groups grew apart, such that bodybuilders now seldom performed any weightlifting movements.

Nutrition is an integral part of bodybuilding history. Roach explores how bodybuilding nutrition evolved, starting with the high calorie, high-
protein diets that focused on beef and dairy products. He also discusses the evolution of protein powders, including insight into the famous Blair’s
Protein.

Used by six Mr. Olympias, the manufacturer of Blair’s Protein claimed their product was identical in composition to human breast milk! There is
also a fascinating discussion about the struggle among bodybuilding empires, such as those run by Joe Weider and Dan Lurie, for control of
the supplement industry.

Of course, Roach discusses the influence of steroids in bodybuilding, focusing not on the ethics of steroid use, but on the origins of these drugs
and how they changed the game.

Muscle, Smoke &amp; Mirrors, Volume 1 will give you a detailed, objective history of how bodybuilding evolved into what it is today. It’s a page-
turner guaranteed to keep you up late at night and get you excited to order Volume II!

[You can purchase Muscle, Smoke & Mirrors: Volume 1 through musclesmokeandmirrors.com and major booksellers such as Amazon.com
and BarnesandNoble.com.]

Charles Poliquin spent his life learning the best strength training techniques from the greatest coaches & athletes around the world. Learn how to implement these methods for yourself with our online cluster training and rotational training programs webinars!