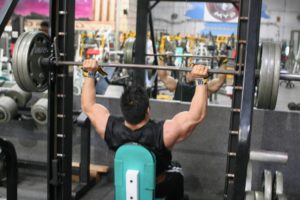 One of the most common complaints I hear from powerlifters, and other athletes who focus on the bench press, is shoulder pain. Sometimes a layoff will resolve this problem and the athlete can get back to hard training, but it’s more likely the pain will come back and may become worse. Let’s look at three major causes of shoulder pain among Iron Game athletes and what can be done about them.

First, there is the issue of flexibility, or rather, lack of it. Stretching the muscles of your shoulder girdle will do wonders for keeping your shoulders healthy and functional. Failure to stretch these muscles regularly can precipitate the onset of injuries. One time-saving way to get your flexibility work in is to stretch these muscles during your rest periods while working legs.

Another common cause of shoulder pain is the build-up of adhesions in soft tissues. These adhesions can occur within the muscle, between muscle groups, or between the nerve and the muscle. Adhesions can occur in any muscle structure, but one most often responsible for bench press induced shoulder pain is the subscapularis. The best way to deal with these adhesions is with Active Release Techniques Treatment®, a soft-tissue management technique developed by Dr. Mike Leahy.

Another common cause of shoulder pain is a muscle imbalance. Many muscles work in what is called antagonistic pairs, such that one muscle will move a body part one direction and its pair will move it the opposite direction. For example, the biceps produce flexion to move the forearm closer to the shoulder and the triceps produce extension to move the forearm away from the shoulder. If there is an imbalance between antagonistic pairs, which often occurs with athletes who don’t lift, it can increase your risk of injuries. With the world-class skiers I trained, for example, at the end of their season I’ve often found that their quads were considerably stronger than their hamstrings and thus required a hamstring specialization program. 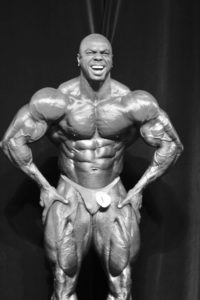 What I often find with those who have shoulder pain is that the muscles of their pectorals are relatively stronger than the muscles that create external rotation of the humerus, such as the teres minor and infraspinatus. Those with this type of imbalance often experience sharp pain in the superior, anterior portion of the upper arm. This pain is often misdiagnosed as bicipital tendonitis.

A bonus to dealing with muscle imbalances is that it may make you stronger in other lifts. When I tested pro hockey player Jim McKenzie on May 15, 1998, he could do a 14-inch close grip bench press with 280 pounds, but could only do a single-arm external rotation with 8 pounds for 3 reps. Yes, 8 pounds.

I started Jim on a program that focused on increasing external rotation strength, along with addressing his overhead pressing strength and the strength of his brachialis, which were also relatively weak. He did no bench presses during this period. On August 15, he could do 35 pounds in single-arm external rotation for 8 reps. He could also do 331 pounds in the close grip bench press, a 51-pound improvement! Then I put him on a bench press specialization program, and on September 10, he did a 380-pound bench press! That’s 100 pounds in four months – do I have your attention?

By taking a proactive approach to your training and addressing these three leading causes of shoulder pain, you may not have to endure pain or cut back on working valuable exercises such as the bench press. Train for gain, not for pain!