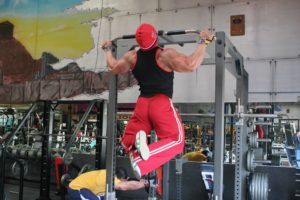 The one-arm chin-up isn’t a showoff exercise, as it’s estimated that only one out of every 100,000 trainees have the genetic potential to do one. Athletes most likely to be able to do one or more are mountain climbers and gymnasts.

One of my clients’ bodyguards who, aside from being a sharpshooter, was an accomplished mountain climber. He said he liked my concept of changing tempos and that he was getting much stronger. I asked him what exactly it had done for him, and he explained that it had improved his chin-ups. To illustrate his significant strength gains, he proceeded to do a full-range, one-arm chin-up, taking 20 seconds for the concentric phase and 20 seconds for the eccentric phase. What was even more impressive was that he was doing it with only his middle finger wrapped around the bar!

There was another mountain climber who worked for our National Ski Team and performed 23 one-arm chin-ups in front of me using a pronated grip. He did them while holding onto the edge of a diving board of a drained swimming pool.

These men were quite slender and didn’t sport excessively muscular arms, but had superior motor-unit recruitment abilities. So, the direct applications of one-arm chins are rather limited because of genetic factors. Furthermore, this movement would be considerably harder for the average bodybuilder, as the rest of his body is generally more massive than that of the average mountain climber or gymnast.

One-arm push-ups are more readily accessible to the average person because they require much lower levels of maximal strength. After all, if Sylvester Stallone can do them . . . ! A more impressive form of the one-arm push-up is to have only the contralateral (opposite) foot on the ground when doing them. If you’re doing one-arm push-ups using the right hand, your left arm is extended in front, and your right foot is kept a few inches off the ground.

I first saw these performed by the late Kay Baxter, a 4x Ms. Olympia competitor, at the Pro World Bodybuilding Championships in Toronto. What I like about this advanced form of the one-arm push-up is that it requires a much greater range of motion than the classic Rocky ones, and you also need to fire a much greater amount of motor units to stabilize yourself.

If you’re up for a challenge, give one-arm chin-ups and one-arm push-ups a try!