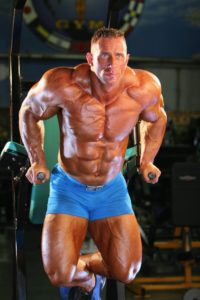 Dips could be considered an upper body squat for their ability to develop the chest, shoulders, and especially the triceps. Before America was obsessed with the bench press, dips were commonly practiced by bodybuilders, weightlifters, and anyone interested in general fitness. Along with the decrease in popularity came many myths about the exercise. Let’s start by addressing a few of these.

The #1 reason dips are rarely practiced is that we have been told they can easily injure the shoulders. First, consider that gymnasts will perform thousands of dips in their athletic career without issue and that in the past physical education classes included them as part of their general strength training programs. If you have a history of shoulder problems or have structural imbalances (often caused by the excessive performance of the bench press!), you should avoid dips – at least, until those issues are resolved.

The second most common reason for not performing dips is that many physical educators, personal trainers, and strength coaches believe they are too difficult to perform. Although not as difficult as pull-ups, that first rep can be a challenge for untrained individuals or those who are especially heavy. Having a spotter lift one or both ankles may provide enough assistant to complete a set. Another method is to perform negatives, starting at the top position and slowing lowering to the full stretch position.

Before going further, I must mention the accomplishments of Marvin Eder. At a bodyweight of 198 pounds, Eder did a single dip with 434 pounds (which was the combined weight of two men who held onto his legs while he did it!) and seven reps with 400 pounds. Also impressive was Pat Casey, the first man to bench press 600 pounds, who did a dip with 380 additional pounds (at a bodyweight of 305 pounds!) and during an all-day workout, 200 reps with 250 pounds! Looking at bodyweight-endurance records, fitness guru Jack LaLanne did 1,000 reps in 35 minutes without his hands leaving the bars.

Dips work the same major muscles as the bench press: anterior shoulders, pectorals, and triceps. As a bonus, they also work many muscles that provide stability during the exercise, such as the trapezius and the abdominals. This stability is not required with dip machines, making it less effective for gymnasts and swimmers, athletes who stand to gain the most benefit from this exercise. 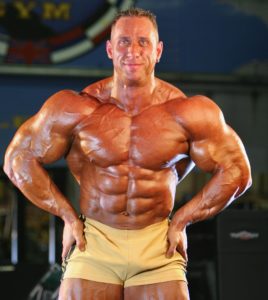 Dips not only work the anterior shoulders, pectorals, and triceps but also the trapezius and the abdominals. (All photos by Miloš Šarčev)

I consider dips unparalleled for triceps development. Support for my belief can be found in Target Bodybuilding by Per A. Tesch, Ph.D. Using magnetic resonance imaging (MRI) scans to determine how hard muscles work during an exercise, Tesch found that dips gave you the most “bang for your buck” by affecting all three heads of the triceps. In contrast, he discovered that the close-grip bench press worked the lateral and medial heads, but not the long head.

Regarding equipment, I prefer using V-dip units. Rather than parallel bars, this unit has the bars coming together to form a triangle. Thus, shorter individuals will perform the exercise more forward on the unit, and taller athletes more backward. Although I admire the accomplishments of Vince “The Iron Guru” Gironda, I do not like his reverse dip (which has the user facing outward), as it tends to place too much stress on the shoulders and elbows.

Dips may have lost favor with the general athletic and fitness population, but that doesn’t mean it’s still not one of the most effective upper body exercises you can perform. Give it a shot!