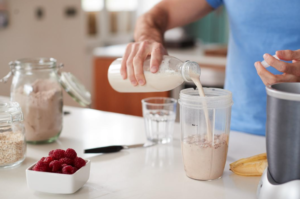 Bodybuilders are unquestionably the most knowledgeable athletes in using nutrition to manipulate body composition. It’s also true their endorsement meal replacement shakes, especially protein powders, have made these products big business. This may not be such a good thing.

As a bit of history, early bodybuilders believed in eating solid meals. One of the most dramatic examples of solid food manipulation was Bruce Randall. Starting in January of 1953, Randall began consuming “mass quantities” of food. A typical breakfast would be 28 fried eggs, a loaf and a half of bread, and two quarts of milk. By August of 1955, Randall had increased his bodyweight from 203 pounds to 401 pounds and became brutally strong, performed good mornings with 685 pounds and curls with 228 pounds! He then lost 218 pounds in 32 weeks and qualified for the 1956 Mr. America. Three years later, Randall won the NABBA Mr. Universe. 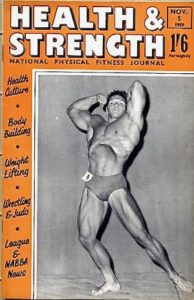 Bruce Randall bulked up to 401 pounds, then lost over 200 pounds and became Mr. Universe.

Today, those who want to gain weight will get much of their nutrition from meal replacement drinks, especially protein drinks. At least, they say they do. Protein supplements are big business, and it makes sense for protein power companies to seek out professional bodybuilders for endorsement. One Mr. Olympia bronze medalist said that although a major supplement sponsored him, his favorite protein drink was powdered milk because it tasted great and mixed easily. As they say, follow the money!

Other than a post-workout shake, I prefer that all meals be solid instead of liquid. Here are four reasons why:

One major problem with relying on liquid meals is the lack of fiber in the diet, which will eventually compromise the intestinal track’s flora, leading to decreased nutrient absorption and elevated LDL and triglycerides. Furthermore, excessive reliance on meal replacements leads to excess iron and copper consumption, which become pro-oxidants in large quantities.

I often consult with trainees who have reached a plateau trying to gain lean body mass. After interviewing them, it always comes out that they take in two or three meal replacements a day. The first thing I make them do is to quit drinking their meals and start eating them.

I recommend liquid meals only for cases where it is the only alternative to skipping a meal because of scheduling problems or particular circumstances, such as taking a flight where the meal choices are a bag of candied almonds or 12 mini-Oreo cookies. You may argue that you don’t have time to cook and prepare all meals, and restaurant food is not always the best option. This is certainly true for most of my athletes and me. One solution is to contract out for meal preparation, as there are people out there who would be glad to do it for you for a fair fee. It can turn out to be much cheaper in the long run.