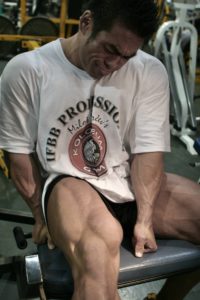 A hardcore workout that will make you limp for days but grow for weeks!

Although the workouts of champion bodybuilders are often too challenging for most trainees, their success in packing on mass leaves clues that anyone can follow. Case in point: Tom Platz.

In an interview for Legends of Bodybuildingmagazine, Platz said that in his early competitive years, he had an impressive upper body “and just average legs.” Eventually, Platz set the standard by which all champion bodybuilder’s legs are measured, and his efforts inspired others to rethink how they approached leg training.

One idea that Platz discussed in this interview was that mass-building workouts must be individualized. For example, in his early years of competition, Arnold Schwarzenegger’s upper body development was such that he could easily out-muscle his challengers. But he was in for a rude awakening at the 1966 NABBA Mr. Universe contest when he was defeated by a much lighter but more symmetrical Chet Yorton. Arnold learned from this loss and dramatically increased his training volume to bring up his lagging bodyparts.

Although Arnold thrived on volume, Platz found he responded best to hard but brief workouts — with lots of recovery. How hard? Insight into Platz’s workouts came at a fitness expo in 1993, when Platz did a squatting exhibition with Fred “Dr. Squat” Hatfield. Hatfield was 2x IPF World Powerlifting champion who had squatted a world record of 1014 pounds in 1987.  For a single rep, Platz did 775 pounds to Hatfield’s 865, but the challenge wasn’t over. The barbell was then stripped to 505 pounds to see which of these remarkable athletes could perform the most reps. Hatfield got 12, but Platz nearly doubled that with 23.

What Platz figured out is that his quads respond best to higher reps, which makes sense because the muscle fibers of the quads are predominately slow-twitch. They are built for endurance, and for bodybuilding purposes, respond well to higher reps. This is why speed skaters and cyclists often display exceptional leg development, even in distance events. Not that these athletes are not strong. Kevin Scott is a speed skater I trained who broke the world record in the 1,000 meters. He squatted, all the way down, 462 pounds. Scott is not a powerlifter or a strongman but an athlete who supplements his training with squats. 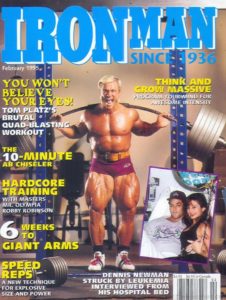 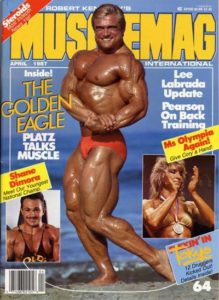 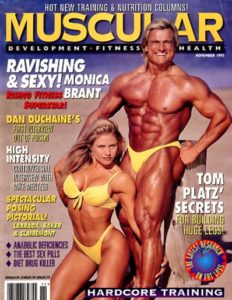 Tom Platz’s phenomenal leg development made him a regular fixture on the covers of bodybuilding magazines.

As with the Platz’s tree trunk training, I’ve seen bodybuilders grow performing sets of 30 reps in the squat. Likewise, I often prescribed a quad-building workout that involved performing leg presses for two minutes — non-stop, full-range at the bottom but not locking out at the top to keep the muscles under continual tension. Extreme measures, yes — but effective.

With that background, I would like to share a leg specialization program with you that I’ve found remarkably effective for building muscle and building it fast! It consists of just two supersets, one for the quads and one for the hamstrings (after all, you want your legs to look good from all angles). Take a look:

Trust me — this program is brutal! It also produces a large amount of lactic acid that may cause nausea, especially the first time you try it. For these initial workouts, take the 240-second rest option. Also, I would not recommend consuming anything two hours before performing it, and that last meal should be light.

If you’re serious about bringing up your leg development in a hurry, this workout is for you.