Insights into the new science of respiratory health and fitness 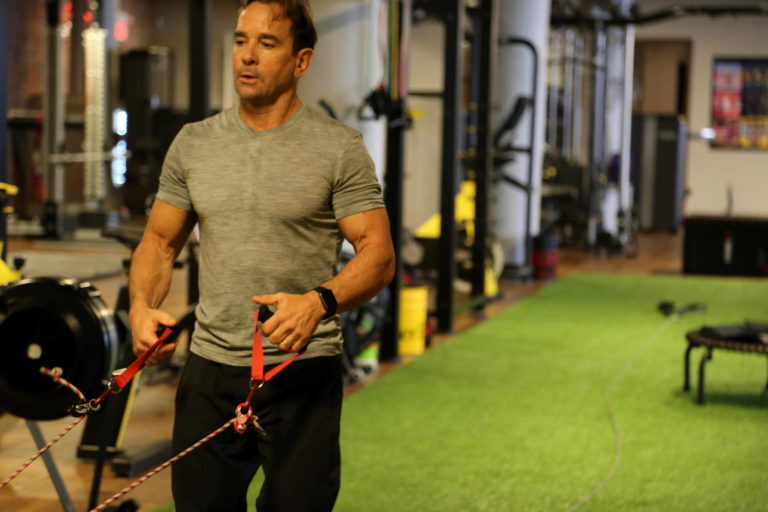 Paul Gagné has devoted over two decades of his professional career studying breathing methods to improve athletic performance and increase the quality of life. He shares his research, and personal experience in applying these methods, in his Breathe Better Webinar.

Giving credit where due, Gagné is not the first to look into the value of breathing methods to improve athletic performance, treat respiratory conditions, help you sleep better, and improve the quality of life. Case in point: Carl Stough and the Stough Method of Breathing Coordination.

With a background as a singer and choral conductor, Stough became passionate about learning how to use the breathing mechanism more efficiently. He was especially focused on developing techniques to strengthen the diaphragm. Among his success stories were singers in the
Metropolitan Opera, performers he worked with from 1958 to 1962. He then expanded his work to the medical field, assisting doctors in several hospitals with their patients who had respiratory conditions such as emphysema. The word got around.

Stough’s success captured the attention of the US Olympic Committee. In 1967, Stough was asked to help US athletes to prepare for the high-altitude conditions of the upcoming Mexico Olympics where “Air is Rare!” Stough accepted the challenge. The results?

Stough received high praise from the head US track and field coach Payton Jordan. “It was under the expert tutorage of Carl Stough our athletes learned to develop their breathing coordination. They quickly found that they could release tensions, handle greater workloads, and recover faster.” One of Stough’s athletes, Lee Evans, won two gold medals and set world records in the 400 meters and the 4×400 meters, records that would last for over two decades.

Coach Gagné discusses how breathing methods can help those with respiratory issues.

Gagné’s work parallels Stough, although Gagné began working with athletes, not singers and patients with respiratory conditions. Gagné never
met Carl Stough, and his Carl Stough Institute for Breathing Coordination closed after his death in 2000. Unfortunately, Stough’s work was never
turned into a course for respiratory therapists or sports coaches. But Gagné is keeping Stough’s legacy alive, building upon Stough’s pioneering work.

Those outside of the strength and conditioning community may not know of Gagné, but those in the field acknowledge that he is one of the most
accomplished strength coaches in the world. Not just for the success he has had training elite athletes in numerous sports over the past 38 years, but his work as a teacher.

Gagné has lectured and given hands-on workshops in 25 countries on topics that include cardiovascular conditioning, postural correction, injury prevention, and more recently, his extensive breathing methods such as those covered in the Breathe Better Webinar.

To be clear, Gagné is not an online coach who faxes athletes’ workouts and then takes credit for their success. He works hands-on with his athletes (and trains them by Zoom, when necessary) to ensure they are training optimally. He is best known for coaching over 100 NHL players, including Jonathan Huberdeau (Florida Panthers) and Marc-André Fleury and Max Pacioretty (Vegas Knights). Here are a few of his atheles from other sports:

Gagné, who currently resides in LaSalle, Quebec, should also be credited for practicing what he preaches. He was a nationally ranked wrestler who began sports at an early age. In fact, his interest in breathing methods could be traced to the age of 13, when Gagné’s wrestling coach would have his athletes wrestle underwater to improve their endurance. (Perhaps this served as inspiration for the classic line by Patches O-Houlihan in the movie Dodgeball, “If you can dodge a wrench, you can dodge a ball!”) Today, at age 59, Gagné is still able to keep up with his best athletes in nearly every measure of cardiorespiratory endurance.

Coach Gagné explains how to gain a competitive edge by improving your
breathing efficiency.

As Gagné explains in his Breathe Better Webinar, for athletic performance, improving your breathing mechanism is not just about getting more oxygen to the tissues. If this were true, you would see distance runners inhaling from tanks of pure oxygen immediately before a race to gain a competitive edge (a method, by the way, that research has shown doesn’t work). Instead, Gagné will teach you how to deal with the “metaboreflex response.”

“Metaboreflex is a condition where the body restricts blood flow to the limbs when the breathing muscles fatigue,” says Gagné. “The body will do this to ensure the role of breathing continues because, after all, breathing is crucial to survival. When the body experiences a conflict between breathing and moving, breathing wins out. By strengthening the diaphragm, an athlete can avoid, or at least delay, metaboreflex so that the working limbs enjoy a better blood supply.”

For those who don’t plan on signing up for the next city marathon, what are the health benefits of the Breathe Better system? Gagné explains, “The
techniques I use improve respiratory muscle effectiveness by reducing the breathing-rate-per-minute; 6-7 breaths per minute is ideal. The average breathing rate in the normal population is 13-15 breaths per minute. This rate creates a constant hyperventilation situation and is linked with stress and inflammation levels, which is in turn, linked with upper respiratory complications. As a bonus, you will improve your C02 level tolerance that will act as a vasodilator, bronchodilator reducing stress level, improving the quality of your sleep.”

If you want to give your athletes an edge or want to learn how to improve your health through optimal breathing techniques, invest in a copy of Paul
Gagné’s Breathe Better Webinar.

[Paul Gagné’s Breathe Better Webinar is available in five formats, from Standard Definition for use on a smartphone to High-Definition quality.
Click this link to get started: https://strengthsenseiinc.com/product/live-breath-better-webinar-with-paul-gagne/ ]