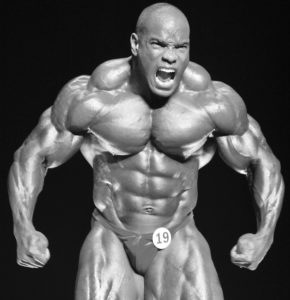 How shoulder shrugs can help you develop powerful, Hulk-like traps!

Physique competitors save the best pose for last — the most muscular! There are many variations, but the most popular pose is the crab pose that makes the traps go pop! Lou “The Incredible Hulk” Ferrigno helped popularize this pose, and to this day few have done it better. So how do you build these impressive upper back muscles?

Besides the competitive Olympic lifting exercises and their partial variations such as pulls, one of my favorite exercises to develop the traps is the one-arm barbell shrug. This exercise is a superior way to produce strength and size gains in the traps and offers several advantages over conventional shoulder shrug exercises.

Compared to the two-arm barbell shrug, the one-arm version provides a greater range of motion. Try it if you don’t believe me. You will instantly feel how much higher the trapezius moves upward when you use the single-arm version versus the two-arm version. I would say the only equivalent exercise would be shoulder shrugs using the Atlantis shrug machine.

Compared to dumbbell shrugs, there is no contact with the body during the one-arm barbell shrug, permitting a much smoother movement. There is a considerable amount of friction created with dumbbells as the plates will rub against your body, especially when using heavy weights. This friction increases the resistance of the movement but without the ability to determine how much the load has increased and consequently how well you are progressing with the exercise.

Next, with this version of the shrug, the working arm must remain in a neutral position. Those who focus on the bench press for several years or spend most of their day sitting in front of a computer screen often develop “round shoulders.”With this posture, the upper back muscles known as the infraspinatus and teres minor and major become stretched and internally rotated, disrupting their normal function and making them more susceptible to instability and even dislocation.

Finally, to prevent the barbell from moving medially (towards the front of the body), the one-arm barbell shrug requires the infraspinatus and teres minor to be recruited isometrically. This additional work develops superior shoulder integrity that would be valuable for athletes such as football and rugby players, athletes who experience a high degree of disruptive forces to the shoulders during their sports. 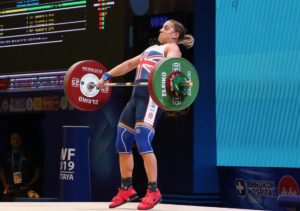 The pulling movements in weightlifting will strongly develop the traps. (Photo by Tim Scott, LiftingLife.com; lead photo by Miloš Šarčev.)

Although it seems like a simple movement, here are some special tips on how to get the most out of the one-arm barbell shrug. First, to make it easier to load the barbell and pick it up to assume the starting position, set the barbell on a power rack across the pins. You can then brace yourself with your free hand against one of the power rack posts, which will allow you to keep your torso in an upright position.

Regarding the use of straps, I would only recommend them if the weight is so heavy that your grip gives out — so no straps for sets of 1-3 reps. To increase time under tension, which favors the development of greater hypertrophy, pause for a predetermined time (1 to 6 seconds, for example) at the end of the concentric range of motion. This paused variation is one that I prescribe for someone recovering from shoulder surgery, as these individuals often cannot handle high loads but still need the hypertrophy to rehabilitate quickly.

If your traps need of a dire challenge, give the one-arm barbell shrug a go. I’m confident you will be pleased with the quick results it produces.