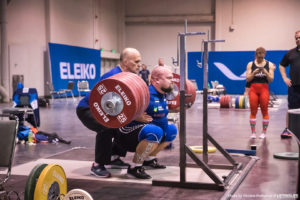 How to cycle these two great lifts for maximum gains

After decades of fighting the misinformation about the exercise being bad for your knees, the strength coaching community embraced the back squat as the King of Lifts. Although there is some truth to the motto that “If you don’t have the squat in your program, you don’t have a program,” one burning question is left unanswered: “What about the deadlift?” More specifically, how can you program deadlifts and squats into your workouts for maximum gains?

Let’s start with some history. Paul Anderson is credited for popularizing the squat. At the age of 20, Anderson squatted 660 pounds, exceeding the world record. A gold medalist in weightlifting in the 1956 Olympics, Anderson squatted 950 pounds in 1965. What’s especially impressive is that he performed this lift without knee wraps or other forms of supportive gear.

The squat is the number one exercise for developing strength and muscle mass in the quads and strongly affects the glutes, hamstrings, and lower back muscles. The squat certainly has a lot of bang for your exercise buck, but a good case can be made for focusing on the deadlift.

Whereas Anderson was a pioneer in the squat, Bob Peoples was a pioneer to the deadlift. In 1946 Peoples deadlifted an absolute world record of 651 ¼ pounds at a bodyweight of just 175 pounds. Three years later, he pulled 725 ½ pounds weighing 178 pounds, a world record that stood for 20 years! However, no discussion on the deadlift would be complete without mentioning Lamar Gant, who pulled 639.3 pounds at 123 pounds, and Andy Bolton, the first to deadlift 1,000 pounds.

The edge that the deadlift has over the squat is that you hold the barbell in your hands, thus more effectively working your grip and trapezius. It’s also easier to master, especially for tall athletes and those with tight calves, and doesn’t require a spotter.

Before going further, there is a compromise between the squat and the deadlift. That compromise is the hex bar deadlift and, if you can still find them, the trap bar. The trap bar came first, but the hex bar tends to be easier to balance and provides more legroom. But let’s stick with the back squat and the conventional deadlift with a straight bar.

When you squat more, your deadlift will go up. When you deadlift more, your squat will go up. Although individual leverages will influence the ratio between the two lifts, many of the best deadlifters are also outstanding squatters. For example, Any Bolton was the first to deadlift 1,000 pounds (eventually doing 1,008) and squatted a WPO world record of 1213 pounds! 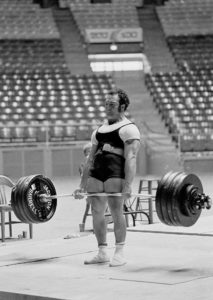 Long arms and a short back provide favorable leverages for the deadlift. Shown is Vince Anello, the first to deadlift 800 pounds while weighing less than 200 pounds. (Bruce Klemens photo; lead photo by Viviana Podhaiski, LiftingLife.com)

As a bonus, both lifts have an irradiation effect on all the other muscles in the body. If your squat or deadlift increases, you can expect your maxes in even seemingly unrelated exercises to increase. Take the barbell biceps curl. If you increase the strength of your glutes and lower back, less neural drive needs to go to these muscles, and more can be directed to your biceps.

The issue with programming squats and deadlifts into the same workout cycle is that it takes a long time to recover from a heavy deadlift workout. My experience is that it takes males 14 days to recover completely, and females 10 days. Although I can’t back this up with any peer review research (just as I can’t find any double-blind studies on the effectiveness of parachutes), I believe you should avoid performing squats and deadlifts in the same training cycle. The exception being if you train twice a day, you could squat in the first training session and deadlift in the second. However, this is for those with many years of training under their lifting belt.

What I suggest is that you alternate between cycles. That is, focus on the squat for 2-3 weeks, then focus on the deadlift for 2-3 weeks. But don’t get locked into devoting an equal amount of time for each lift – use longer training phases for the relatively weaker lift.

Don’t worry, your quads won’t shrink while you focus on the deadlift. What you will find is that the weights will fill lighter when you take the bar off the rack after each deadlift cycle, giving you more confidence to hit new maxes.

Deadlift vs. Squats? That is the question. The answer is both!