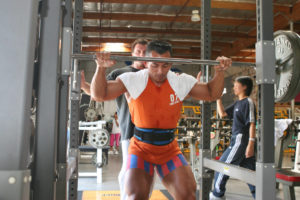 One of the most common mistakes I’ve seen with beginners is trying to follow the high-volume training programs of elite athletes. They quickly find themselves in a state of overtraining that causes their progress to stall or even regress.

Part of the blame must go to the bodybuilding magazines. For example, one major bodybuilding publication claimed that Dave Draper, the 4thplace finisher in the 1967 Mr. Olympia who acted on the big and small screen, would perform 20 sets per bodypart. Seriously, 20 sets? According to Drapers’ website, he would perform 5 sets per bodypart in a typical training session. (If you want to know more how this “Blond Bomber” and other champions of his era trained, I strongly recommend Draper’s book, Brother Iron Sister Steel.)

The repetition method for determining volume is most accurate in weightlifting. In this sport, the primary exercises are the snatch and the clean and jerk (with squats being assistance exercises), and the exercises are performed explosively. 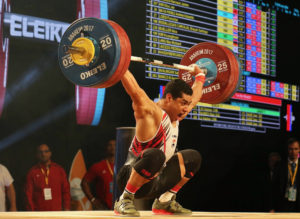 The repetition method is the most accurate way to determine volume in weightlifting. (Lead photo by Miloš Šarčev, this photo by Joseph McCray, LiftingLife.com.)

How much volume do weightlifters perform? For starters, consider that respected Russian weightlifting coach Arkady N. Vorobyev recommends performing 2-7 exercises per workout, with the average being 4-6. Total rep ranges were then determined by the intensity (percentage of 1-rep maximum) of the weights lifted. Workouts typically lasted 90-120 minutes. This was the standard protocol used by not just Russians but many elite weightlifters from other countries. Then came the Bulgarians.

The Bulgarian weightlifters in the 70s and 80s put in a ridiculous amount of volume. Bulgarian workouts were brief, about 45 minutes per session, but they would often train as much as five times a day, 5-6 times a week! Here is what a typical training day might look like:

These workouts were not “going through the motions” sessions focusing on technique. The Bulgarians would train to a maximum in the snatch or clean and jerk, several times a day. Lifting from other countries also began progressively increasing their volume of training. Consequently, world records frequently fell and achieved such high levels that few of the world records established in the 80s have been exceeded today. (Think about the significance of this – how many world records from four decades ago in any sport are still standing today?) Of course, many of these results come with an asterisk because in that era it was relatively easy to pass doping control.

When analyzing the training of elite bodybuilders, increased volume comes primarily from performing more exercises, allowing for the recruitment of a larger selection of motor units, hence inducing hypertrophy in more fibers. However, the metabolic cost of a bodybuilding exercise must be associated with the size of the muscle mass worked. For example, the sets of 10 in a squat I’ve prescribed in my German Volume Training (GVT) program have a much higher metabolic cost than 10 reps in a biceps curl. Then there is the issue of intensity.

I’ve seen many bodybuilding celebrities presenting their version of the German Volume Training system. As with those fictional 20-set workouts, many of these “modified” GVTworkouts seldom produce the expected results because their creators didn’t understand that volume is inversely related to the intensity – always!Unless you are taking some powerful “ergogenic aids,” you cannot train intensely and with large amounts of volume simultaneously. When the volume is especially high, such as with GVT, the intensity must be low. You can’t perform every set of a GVT program to failure – not even close! Only the 10threp of the 10thset of each exercise is taken to failure, as the goal is to complete all 100 repetitions.

The German Volume Training program is an amazingly effective workout to use for brief periods to stimulate hypertrophy. It is not a workout for beginners (and when I’m talking about beginners, I’m referring to training age, not chronological age). Without a base of muscular endurance, it would be difficult for a beginner to put the necessary effort into this program to get the most from it – and the volume of training would most likely result in overtraining. There are less demanding and time-consuming workouts that would be more effective. To answer the question, “How would I modify the German Volume Training for a beginner?” I wouldn’t.

Overestimating one’s conditioning level and performing too much volume is one reason so many weekend warriors in the gym quickly become the weekend wimpy or the weekend wounded. Become a student of the Iron Game and training smarter, not harder!