A closer look at a strength training classic 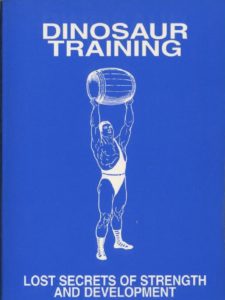 In Charles Poliquin’s shortlist of favorite strength training books you will find Brooks Kubik’s Dinosaur Training: Lost Secrets of Strength and Development. First, published in 1996, Kubik’s straightforward advice on how to get brutally strong has stood the test of time.

Dinosaur Training was a hit right out of the gate. It received positive reviews in serious Iron Game publications, including MILO and Iron Man magazine, and sold 3,300 hardcopies in the first 18 months.

Kubik is a fitness writer who “walks the talk.” A former high school wrestler who attributes his use of weight training to winning numerous championships, Kubik went on to compete in powerlifting after graduating from law school and establishing his career. He began competing at the age of 33 and officially bench pressed 407 pounds in the 220-pound bodyweight division.

Why does Kubik call his training “The Dinosaur Alternative?” Kubik says he chose that name after a friend referred to the two of them as dinosaurs for their old fashion training ideas. Says Kubik, “When all the ‘modern’ trainees can lie down on a flat bench and push a 400-pound barbell with a three-inch bar from chest to arm’s length – and do it without a bench shirt, wrist wraps or drugs – then I’ll worry about being old fashion. When
everyone in the chrome and fern crowd can do a strict curl with 160 pounds with the same three-inch bar, then I’ll think about going to chrome and fern land…But until then, I’m happy to be a living fossil.”

Kubik says the primary goal of Dinosaur Training: Lost Secrets of Strength and Development is to introduce the reader to exercises and methods to get them “bigger, stronger, and better conditioned.” He sums up his training philosophy as follows: “Progressive poundages are the name of the game. If you are not adding weight to the bar on a regular basis, you are kidding yourself. But how many people actually try to increase their training poundages? How many members of your gym are content to waltz their way through the same workout, with the same exercises, sets, reps and poundages, year after year after year?”

What does a Dinosaur Training program look like? Consider Day one of this two-day
split schedule:

Brooks Kubik’s Dinosaur Training is proof that sometimes the old ways are still the best. Learn the secrets of the strong and pick up a copy today!

[You can purchase Brooks Kubik’s Dinosaur Training: Lost Secrets of Strength and Development at www.brookskubik.com ]

If you’re a coach or an athlete, the Dojo of Strength is the best place to receive exclusive content from Charles Poliquin, monthly programming, and up-to-date training information on performance, nutrition/supplementation, & lifestyle. Join today for instant access!