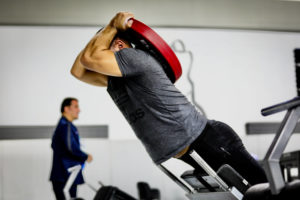 A look at a valuable but often forgotten strength training exercise

No matter how packed a commercial gym is, one piece of equipment there is never a line to use is the back extension bench. The few who use this unit may perform a dozen reps as a warm-up, only using bodyweight. Such apathy about this valuable piece of equipment has to stop.

Before getting into the value of back extension exercises, let’s explore the primary reason back extensions lost their popularity: the competition.

Nautilus founder Arthur Jones helped popularized seated back extension units with his development of the Medical Exercise (MedX) Lumbar Extension Machine. Working with researchers at the University of Florida, Jones reportedly spent nearly a half-billion dollars over 14 years to perfect his lower back machine. The key was a pelvic restraint that stabilized the pelvis and reduced the involvement of the hamstrings and glutes. The results? Impressive.

Jones’ researchers found that 80 percent of the subjects experiencing chronic back pain reported a reduction of pain after 12 weeks. This research enabled Jones’ researchers to develop strength standards associated with a healthy back. Many insurance companies loved the MedX program, as it provided objective data about how back injuries were progressing. Although the MedX Lumbar Extension Machine was expensive (partly due to the computer software it contained to produce testing data), Jones developed lumbar machines with pelvic restraints for commercial gyms.

Other exercise equipment companies capitalized on Jones’s research with their variations of lumbar machines. These machines were popular among the general population because they were easy to use and comfortable. Also, back extensions performed on a back extension bench were not recommended for those with medical conditions such as hypertension, and some people experience dizziness when their head was lowered below their hips during this exercise. For them, the reverse hyper was a better alternative. And thanks to the marketing efforts of Louie Simmons, considered the most accomplished powerlifting coach in history, reverse hypers became the “go-to” lower back exercise in strength training gyms.

As Jones proved in his research, a back extension is not an isolation exercise for the lower back muscles. Other muscles strengthened include the glutes, hamstrings, and (if the machine has a footplate) even the calves. The key lower back muscles worked are the erector spinae group that contains three parallel muscles that run along the spine and create extension and lateral flexion of the spine. These muscles are the spinalis, iliocostalis, and longissimus.

In addition to other exercises that work the lower back, such as good mornings, I have athletes perform variations of back extensions. Strengthening the lower back muscles creates an “irradiation effect” that enables them to lift more weight in other exercises. Just as powerlifters often find that their squat goes up after performing a training cycle that improves their deadlift, I found that increasing lower back strength with exercises such as back extensions improves strength in seemingly unrelated lifts, such as overhead presses.

If you look at the training programs of Russian weightlifters in the 60s and early 70s, you’ll see that they often used significant weights in back extension exercises. The Russian Champion Vasily Alexeev, the first man to clean and jerk 500 pounds, reportedly performed back extensions with 315 pounds for five reps! Russian lifters were also known to perform bodyweight-only back extensions as a warm-up.

For the complete development of the erector spinae muscle group, consider that the 45-degree back extension has a different resistance curve than a conventional back extension. The incline version creates more resistance at the beginning of the exercise and allows for a greater range of motion, whereas the conventional version creates more resistance at the end of the exercise. Thus, both exercises should be performed to more completely overload all areas of an athlete’s strength curve. But don’t stop with back extensions. 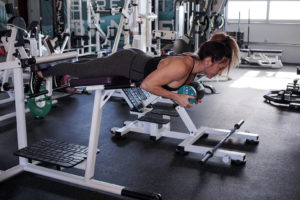 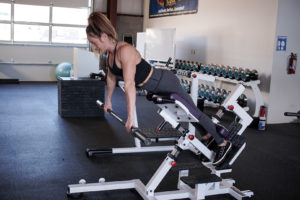 Changing the angle of the back extension alters the resistance curve of the exercise.

Although Jones produced impressive results with his seated lumbar machine, back extensions may be a better choice for some individuals with lower back pain. I say this because seated back extensions place higher compressive forces on the spine than back extensions performed from a horizontal position.

For those in no pain and who want to challenge their back muscles, there are many ways to increase resistance in these exercises. You can hold a dumbbell or weight plate across your chest, a weight plate on your upper back (not your head!), and a straight bar across your shoulders (placing the bar in the same position as a back squat). You can also set a barbell on the floor just in front of the unit, grasp the bar with an overhead grip, and lift it from there. You can increase the range of motion of the exercise by performing the exercise with a wider grip or using smaller diameter plates.

Back extensions can be a valuable addition to the training toolboxes of athletes, the general population, and those who just want to get stronger. Don’t forget them!