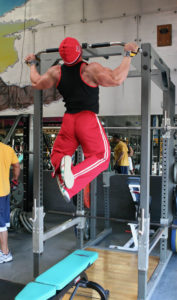 The pros and cons of two upper body strength builders

I explained why I preferred chin-ups to pulldowns in thePoliquin Principles. In case you missed it, let me give you a refresher course on this subject.

A half-century ago, chin-ups were a standard exercise in physical education classes. The exercise was even part of Presidential awards programs (for girls, the test involved just hanging on a chin-up bar, but at least they made an effort). Since then, our physical education classes gradually got rid of chin-ups, and it’s rare to see them performed in commercial gyms. Pulldowns, however, have become the go-to exercise for the upper back.

Let me make it clear: I am not anti-pulldown, as I prescribe many variations of them in my workouts, not just for the general population but also for my athletes. I find them especially valuable for body composition workouts due to the high volume and short rest periods associated with these programs. For example, it would be pointless to have an overweight client superset chin-ups and dips for 4-5 sets of 10-12 reps with 30-seconds rest. They can’t do it. For these individuals, it would be better to use that protocol with pulldowns and a triceps dip machine.

Next, just as triceps kickbacks have some training effect but are vastly inferior to decline triceps extensions with chains, pulldowns take a distant second to chin-ups. One reason pulldowns are lower on my list of best bang-for-your-buck exercises is that you pull the bar around the body with pulldowns rather than pulling your body around the bar as with a chin-up. As a result, the abdominals are more strongly affected during chin-ups. This difference explains why improving your strength in pulldowns often has little transfer to chin-up ability, whereas improving your chin-up strength will dramatically increase how much weight you can use in pulldowns.

Before going further, know the difference between a chin-up and a pull-up. A pull-up uses a pronated grip, such that your palms are facing away from your body, and a chin-up uses a supinated grip so that your palms are facing your body. A semi-supinated (neutral/parallel) grip is performed with your palms facing each other, so it can be considered a hybrid of the two grips. Finally, a mixed grip is with one palm pronated and the other supinated.

From this starting point, there are considerably more variations. Here are eight types of chin-ups I described in detail in the Poliquin Principles: 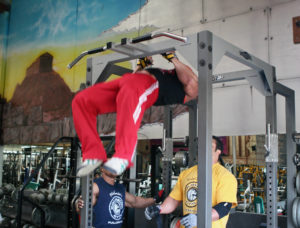 Many advanced forms of chin-ups will challenge the strongest of athletes.Photo Miloš Šarčev

Rather than having a stand-alone chin-up station, gyms will often have a chin-up bar attached to a power rack. These bars are frequently cheap, sometimes just being a crossbar connecting the posts, and are often smooth and difficult to grip.

To get around this problem, move the safety rods of a power rack as high as possible and rest an Olympic bar across it. These bars are knurled, with the powerlifting bars having thicker knurling than the Olympic bars. You want to move the barbell flush against the post and stand outside of the rack. As you lift yourself, the barbell will try to move backward against the post, increasing stability. For parallel-grip chin-ups, place a V-handle attachment over the bar. If you’re a gym owner or are building a home gym, consider that the Canadian exercise equipment company Atlantis has a power rack with various chin-up attachments, enabling the user to perform all these exercises.

Those who have followed my career know that I am a big fan of using thick implements, and chin-ups are no exception. Often, chin-up ability is limited by the strength of the grip. Many years ago, I trained a female judo athlete who could perform five pull-ups. I asked the gym owner where she trained if I could wrap athletic tape around the bar used for chin-ups, and he agreed. I had her perform pull-ups, 5×5, twice a week. However, each week I would make the bar thicker by wrapping another piece of tape around the bar. After five weeks, I tested her using a regular grip. She did five pull-ups with an additional 45 pounds! Again, no additional resistance, just training with a thicker diameter bar. She went on to become the US Open champion.

Because high reps are not effective for increasing strength and muscle mass, you will need to start adding additional load at some point. You can start by holding a light dumbbell between your ankles, which allows you to quickly reduce the weight during a set to help you complete a few additional reps. I don’t like weighted vests as they compress the nerves. A dipping belt is better, but the best way to add resistance is with a tree-climbing belt as they are sturdier than dipping belts and distribute the load evenly.

Pulldowns are here to stay, but if you’re serious about getting stronger as quickly as possible, focus on chin-ups and enjoy the gains.