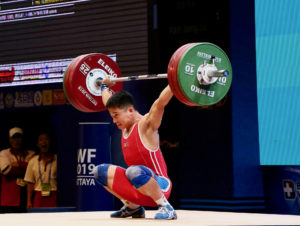 One fitness coach who has been racking up views on social media platforms with his controversial exercises is Ben Patrick, better known as the “Knees Over Toes Guy.” What sets Patrick apart, and specifically what has captured our attention, is his frequent references to the work of our mentor Charles Poliquin.

Patrick often refers to his company with the initials ATG. This company is not to be confused with a popular Iron Game news site called ATG, an acronym for All Things Gym, but the Athletic Truth Group. It’s also important to mention that his website includes a disclaimer that “Ben is not a medical professional and may not give advice regarding medical conditions.” With that background, let’s take a closer look at what he’s recommending.

Many strength coaches teach so-called “sport-specific” exercises that work the legs through a partial range of motion, such as powerlifting squats or the so-called Bulgarian split squats. Patrick comes from the perspective that the best way to improve athletic performance and prevent knee and ankle injuries is to perform exercises through a full range of motion. Also, some exercises he endorses, such as variations of sissy squats, have been shunned by many personal trainers and strength coaches for fear that they damage the knees.

We admit some of Patrick’s claims seem a bit, well…embellished. He says his methods not only resolved his chronic knee pain, despite having surgery, but increased his vertical jump from 19 inches to 42 inches! Further, Patrick’s company website includes a bold statement claiming they “have more knee success stories than anyone on the planet.” His marketing efforts resulted in him being mentioned on the Joe Rogan channel, which garnered over a million views. His YouTube page has attracted over a quarter of a million subscribers. Good for him! 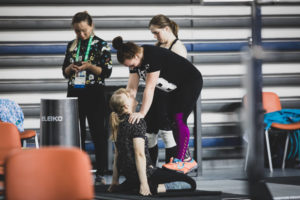 An elite weightlifter has a training partner help stretch her quads during a competition. Such extreme positions are similar to the movements shown in the videos by the “Knees Over Toes Guy.” (This photo by Ryan Paiva; lead photo by Tim Scott, LiftingLife.com)

To his credit, Patrick acknowledges that many of his ideas came from studying the work of Poliquin. One video titled “How I Saved My Knees” starts with a photo of Poliquin and this statement, “Charles Poliquin trained the most Olympic medalists in history and said that the knee that can go farthest and strongest over the toe has the least chance of knee pain and injury.” Probably not Poliquin’s exact words, but we appreciate the reference.

In another video, Patrick includes a photo of Poliquin’s wearing a “Legends Never Die” T-shirt and discussed the Strength Sensei’s work with long jumper Dwight Phillips.

Phillips placed eighth in the 2000 Olympics with a best of 26-feet, 5 ½ inches. When Poliquin started training Phillips before the 2004 Olympic Trials, he performed a structural balance assessment. He found that Phillips was relatively weak in his hamstrings, upper body, and had poor eccentric strength. One of the full-range leg exercises Poliquin had Phillips perform was the 1 ¼ front squat (with the quarter rep being performed at the bottom). How did the program work?

Going back further, Charles often referred to the elite athletes he trained who benefitted from full-range leg exercises. Consider Jud Logan, a 4x Olympian in the hammer throw who Poliquin trained in the 90s.

Logan had been suffering from knee pain for eight years when he started working with Poliquin. Poliquin thought the pain was caused by an altered strength curve Logan developed from performing partial squats. Poliquin switched him to full squats, such that in the deep position, his hamstrings covered his calves. Six weeks later, Logan was pain free and said his sitting position in turns improved. As for strength, Logan’s full squat improved from 297 pounds to 496 pounds in just seven months. Even more impressive were his results in the throwing circle.

On October 9, 1991, Logan’s personal bests were 77 meters (7.26 kg hammer) and 86 meters (6 kg hammer). By May 5, 1992, Logan improved his heavier hammer throw by 2.86 meters and his lighter hammer by 3.04 meters! He also established a world record in the 35-pound hammer. Such results check off two main boxes in Patrick’s list of training goals: 1) Improved athletic performance, and 2) Reduction or elimination of knee pain. 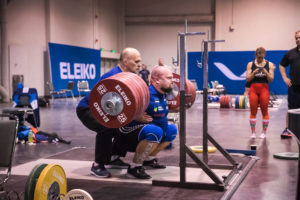 Two exercises Patrick promotes are the Poliquin step-up and the Petersen step-up. A bit of history. Poliquin trained the Canadian National Women’s Volleyball Team in the late 80s. During his initial structural balance assessments, he found that most of these athletes suffered a type of overuse injury called jumper’s knee. An athlete with jumper’s knee may find squatting extremely painful, and for this reason, will usually avoid the exercise. A conservative approach involving rest and anti-inflammatory medications is often recommended. Poliquin took a different approach.

Poliquin believed these athletes’ knee trouble could be attributed to weakness in the vastus medialis oblique (VMO), the teardrop-shaped muscle on the inside of the lower thigh. Among its many functions, VMO helps the kneecap track properly. Poliquin believed their imbalances developed from sport-specific training that doesn’t take the legs through a full range of motion. 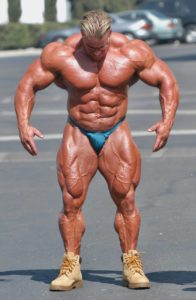 As dramatically demonstrated in the physique of 4x Mr. Olympia winner Jay Cutler, the VMO is a teardrop-shaped muscle on the inside of the lower thigh.(Photo by Miloš Šarčev)

One of the key structural balance exercises Poliquin used with these volleyball players was the Petersen step-up, which focuses on the VMO. As their strength improved, he transitioned them to full squats. Although rest is usually recommended for overuse injuries, these athletes did not have to stop training or cut back on practices, a common recommendation of many doctors and therapists. Within two months, only one player still had jumper’s knee.

Should Patrick’s focus on “knees over toes” be considered controversial? Maybe not. Consider that the knees “go over the toes” in many normal activities. In the simple act of walking, the knee of the rear leg will move in front of its toes. During the split for the clean and jerk, the front lower leg should be positioned perpendicular to the floor, but the rear knee should be in front of the toes of that leg. Despite the stress weightlifting places on the body (males weightlifters have clean and jerked over triple bodyweight and female lifters nearly 2.5 times bodyweight), knee and ankle injuries are rare. 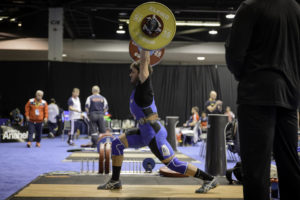 In the jerk portion of the clean and jerk, the front lower leg becomes perpendicular to the floor, but the rear leg has the knee positioned well in front of its toes. (Photo by Linda Brothers, LiftingLife.com)

In his classic, The Poliquin Principles, Poliquin discussed the issue with performing leg extensions as they created a high level of shearing forces. Shearing forces are forces that try to pry the knee joint apart. Poliquin said that with the squat, the resistance travels more in line with the thigh bones, creating compressive forces that the knee is better able to handle. Further, studies have found that the highest levels of adverse stress on the knee in a squat is at 90 degrees (parallel), not the full squat. And in one study published in 2013 in sports medicine, researchers found that the idea that full squats can create a higher risk of chondromalacia, osteoarthritis, and osteochondritis in deep squats is “unfounded.” 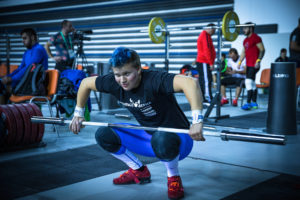 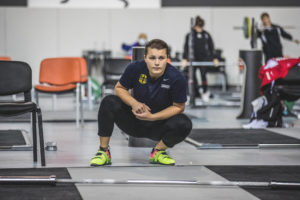 As for box squats in which the shins become perpendicular to the floor, an exercise variation promoted by powerlifting guru Louie Simmons, Poliquin believes that this exercise could create tightness in a glute muscle called the piriformis. He said tightness in this muscle adversely affects lateral movements. For powerlifting, perhaps the box squat is a good idea, but athletes in other sports should perform them on a limited basis, if at all.

Ben “Knees Over Toes Guy” Patrick is OK in our book because he gives credit where credit is due. Consider him another in the long line of successful coaches who have benefited from the pioneering work of Charles Poliquin.