A classic weightlifting textbook by an Iron Game Legend

The acronym G.O.A.T translates into Greatest of All Time, and is frequently used to describe the best athlete of all time, and often sparks debate. Is the GOAT in hockey Wayne Gretzky or Gordie Howe, in basketball Michael Jordan or LeBron James, in football Tom Brady or Lawrence Taylor? In weightlifting, one name that is always brought up in any GOAT discussion is Tommy Tamio Kono.

Kono won Olympic gold in 1952 and 1956 (winning silver in 1960), won six World Championships, and broke 22 world records. However, Kono wasn’t a one-lift specialist as he smashed 10 records in the Olympic press, 2 in the snatch, 4 in the jerk, and 6 in the combined total of the three lifts. He was inducted into the International Weightlifting Hall of Fame in 1993, and in 2005 the International Weightlifting Federation awarded Kono the title, “Lifter of the Century.” Kono passed away on April 24, 2016, at the age of 85. 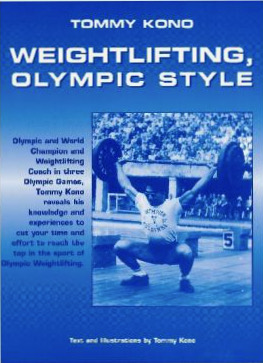 Kono was also an expert at manipulating his diet to maintain strength, as evidenced by the fact that he won the Olympics in the lightweight and light heavyweight division and three world championships in the middleweight division. And Kono looked strong, possessing a physique that enabled him to win the Mr. Universe crown in 1955, 1957, and in 1961. Coach Poliquin has recognized Kono’s accomplishments and some of his
training wisdom in his books and articles. 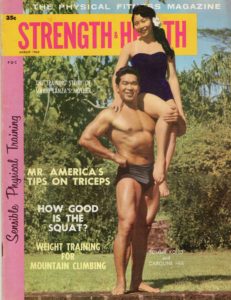 When Kono retired from lifting, he stayed involved in the sport as a coach and as a writer. His most notable work was “The ABCs of Weightlifting” series, published in Strength and Health magazine. The complete series of articles are reproduced in Kono’s book, Weightlifting, Olympic Style. But there is more, much more, to this classic textbook on the sport of weightlifting.

Weightlifting, Olympic Style is 272 pages and written in small type. The content is supported by quality drawings and many photos of legendary weightlifters. It’s divided into the following 10 sections:

This format takes the reader from beginner level to advanced lifter to coach. Section 1 and 2 focus on technique, followed by Section 3 that introduces you to the basics of program design; useful charts and forms to make working planning easier are provided in Section 10. From there, Kono addresses the competitive lifter, helping the lifter prepare for their first and future competitions.

Throughout Weightlifting, Olympic Style, Kono shares many of his experiences in international competition. If you like a good story, you’ll especially enjoy Section 6, where Kono takes you from his first competition to his victories in National, World, and Olympic Championships. He discusses the challenges of competing on an international stage in foreign countries, competition strategies and shares many humorous stories (such as when one of his teammates unsuccessfully attempted to smuggle toilet paper at the 1957 World Championships!). You’ll also enjoy Section 8, which contains some great stories about weightlifting legends.

In Kono’s era, athletes did not have the Internet (or computers, for that matter), and got much of their training knowledge from magazines and books. Kono wrote for the general audience and was a good storyteller, and as such, his material is treasured. Although much more is known now about optimal lifting techniques and training methods, Kono’s work is still considered one of the most complete references about the sport of
weightlifting.

[You can purchase Tommy Kono’s Weightlifting, Olympic Style through Amazon.com for a significant investment, but you should search the Internet to find other sources]

Join the Dojo of Strength for monthly content to help you achieve the coaching and training results you’re looking for. Each month, new programs, articles, and videos are released to challenge your knowledge and help you progress towards your goals.