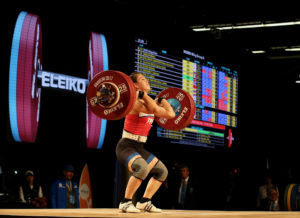 Considerable attention has been placed on the power clean in American football. One survey of 137 Division 1 college football coaches found that 85 percent of them used the exercise. For this reason, I’d like to present a 32-week program to give athletes a monster pull based on the concept of structural balance.

Many strength coaches design their workouts using the principle of “training movements, not muscles.” Yes, focusing on exercises that use multiple muscle groups such as squats and deadlifts has value, but often performance in these lifts is limited by weakness in a single muscle. Consider Jim McKenzie.

McKenzie’s NFL career lasted 15 seasons, and he often played the role of an enforcer, so strength was a key aspect of his training. During my initial structural balance assessment, McKenzie’s best close-grip (14 inches) bench press max was 280 pounds. However, I also found that his external rotation strength was extremely poor and believed this weak link affected his pressing strength.

Elite weightlifters often use partial movements such as pulls and deadlifts to improve their strength in the competition lifts. (This photo by Lead photo by Viviana Podhaiski and this photo by Joseph McCray, LiftingLift.com.)

Using a structural balance approach to periodization, here is a general outline of a three-phase program for a beginner designed to improve the power clean dramatically. Phases 1 and 2 contain four three-week workouts, followed by a week of active rest. Phase 3 has two three-week workouts.

Notes:Weeks 1-6 focuses on the hamstrings and lower back, which are often relatively weak in many athletes, especially those who perform much of their training with machines. Weeks 6-9 focuses on the middle part of the pull, and weeks 10-12 on the top of the pull. After three months, one week of active rest (such as playing basketball) is needed.

Notes:The last phase only has two three-week workouts. The first period will focus on the start and mid-range portion of the pull, and the final three weeks will focus on the full power clean (and smashing PRs!).

Although some strength coaches believe the best way to improve the power clean is to perform power cleans, most elite weightlifters perform partial variations of the Olympic lifts such as pulls. At least, those who have not seriously practiced the power clean may have developed structural imbalances. Using the type of periodization program presented here may be a better option than just performing the full lift.

The bottom line is to consider using a structural balance approach to short- and long-term periodization workouts, progressing from general to more specific exercises. My athletes have achieved success with this approach, and I believe you can too!