The ultimate resource for understanding the Russian approach to powerlifting 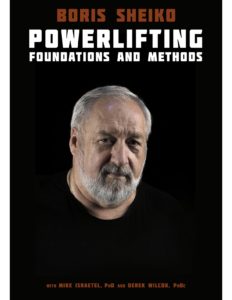 In the early days of powerlifting, US athletes dominated the sport. Consider these names: Jon Cole, John Kuc, James Williams, Don Reinhoudt, Mike MacDonald, Bill Kazmaier, and Lamar Gant. These athletes became legends, and others followed who would keep America at the top of the sport. Then came Boris Sheiko.

Coach Sheiko could be considered the Russian version of Louie Simmons. In competitions run by the International Powerlifting Federation (IPF), Sheiko’s athletes have won numerous World Championships and helped Russia win many team titles. In contrast, Simmons athletes often compete in federations with different rules regarding the performance of the lifts and the use of supportive gear. So rather than arguing which system is better, just say that it’s like comparing apples to oranges.

Born in Moscow, Sheiko attended the Institute of Physical Culture in Kiev at the Department of Weightlifting. He went on to coach weightlifting from 1975 to 1989, working with the junior lifters on the national team from 1984 to 1986. One of his talented junior lifters, Alexey Sivokon, entered his first powerlifting meet in 1989. In 1990 he focused strictly on powerlifting and became World Champion. The following year Sheiko became a powerlifting coach in Kazakhstan. His coaching achievements grew, such that in 1998 he was named head coach of Russia’s men’s national team and became Russia’s most decorated powerlifting coach.

In addition to offering a textbook that runs 377 pages with an extensive bibliography, Sheiko includes a social media page of websites and videos. For example, there is a link to Boris Sheiko’s Facebook page where you will find Sheiko coaching athletes, giving interviews, teaching technique, along with competition videos of his athletes. There’s even an “East meets West” video of Sheiko meeting and coaching with Louie Simmons
(and in that video you’ll also see Jance Footit joining in the fun).

The material in Powerlifting: Foundations and Methods is supported with tables, figures, and photos. Sheiko organized his training philosophy into the following seven chapters:

There are few powerlifting books that are as complete and as extensive as Powerlifting: Foundations and Methods. Lifting technique, program design, along with the science to back up these theories — it’s all here. If you’re a serious student of the sport of powerlifting, or just want to understand how one of the most successful powerlifting coaches got his athletes brutally strong, you need this book!

[You can purchase Boris Sheiko’s Powerlifting: Foundations and Methods through Amazon.com.]

If you’re looking for monthly programming and the best-training information, join the Dojo of Strength, which has monthly programs and articles from Charles Poliquin and our team of coaches.