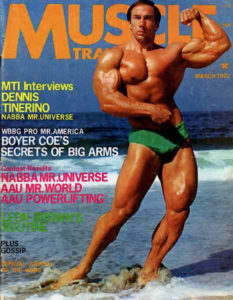 Insights into the training of a bodybuilding legend

As a teenager, Boyer Coe knew he had what it would take to become a champion bodybuilder.

Coe began lifting in 1960 at age 14, and by age 17, he could bench press 420 pounds – quite an accomplishment when you consider that he did it without the benefit of any of the special supportive gear used by today’s powerlifters.

Two years later, Coe won the Mr. Louisiana title and then went on to win the Teen Mr. America, Mr. America, and Mr. Universe; he also placed fourth on three occasions in the Mr. Olympia. In 1994, in his mid-40s, Coe returned to the stage after a 10-year hiatus – in amazing shape – and took third at the Masters Mr. Olympia, defeating former Mr. Olympia Chris Dickerson. And the secret to Coe’s success?

“At the most basic level, there are no real secrets, although it’s only human nature for young bodybuilders to think that there are,” says Coe. “You must work hard and apply 100 percent effort 100 percent of the time. Hard work is something that 99 percent of the people in the world shy away from. If something proves to be the least bit difficult to achieve, they immediately give up. The man or woman who doesn’t give up, who goes on despite something being difficult to achieve, always comes out on top.”

At 5’7″, and a ripped 215 pounds, Coe was known for his amazing biceps, which seemed to be composed of several mounds of small biceps stacked upon each other. He was always in shape – you only have to look at the history of his photos to see he was a master of peaking at the right time. And for any of you older readers seeking inspiration to keep in shape, check out the photos when Coe was at his prime and compare them to how he looked at the 1994 Masters Mr. Olympia. Coe knew exactly what it took to get in top shape and stay that way.

Although Coe says there are no secrets in bodybuilding, one of the reasons he was so successful is that he always had an open mind – he was known as a “thinking bodybuilder.” Coe set aside his ego and experimented with new training methods to bring his conditioning to higher levels. Case in point: Coe’s work with Arthur Jones, founder of the Nautilus and MedX corporations.

In the ’70s and early ’80s, Jones was known for surrounding himself with the best bodybuilders of his era. In 1982 Coe went to work for Jones and was personally trained by him. Although Casey Viator and the Mentzer brothers thrived on this type of training, it wasn’t right for Coe. Coe found that after eight months of training under Jones’ supervision, he had made no gains in muscle size; what’s more, after that experiment, Coe changed his workouts and quickly added 20 pounds of muscle.

Coe believed that he had less genetic potential than Casey Viator or Sergio Oliva, two other top bodybuilders whom Jones trained – Coe joked that Viator had only to look at weights to grow! Coe felt that to compete at the highest levels he had to train smart and outwork his competition – he says that he could push himself to the limit he seldom missed a workout.

Boyer Coe believed that the real secret to success in bodybuilding is to “work hard and apply 100 percent effort 100 percent of the time.” (Miloš Šarčev photo)

Many years ago, Coe visited me in Colorado and shared a workout program that is great for increasing both your hypertrophy levels and strength endurance. It’s called “work capacity training” and involves using descending loads in the following manner:

Because the B and C exercises in this workout use many of the same muscles as the first exercise, you may only need one warm-up set for these exercises. Here is how the workout could progress, step by step. Note how after the first set of each exercise, the weights are adjusted according to strength level and fatigue.

Coe’s successful career spanning more than three decades will ensure that he is remembered as one of the legends of bodybuilding. An ambassador for the sport, Coe spoke frequently to groups about its lifelong benefits. Boyer Coe is a role model for all that is right about bodybuilding!