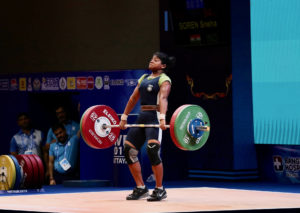 The International Weightlifting Federation (IWF) recognized women’s weightlifting as a sport in 1987. However, as the sport grew in popularity, it was quickly realized that there was one fundamental problem: the barbell.

Because women generally have smaller hands, many female weightlifters found it was difficult to grip the 28mm diameter bar due to poor mechanical leverage. Andrew “Bud” Charniga is a weightlifting sports scientist who sells competitions barbells for weightlifting. Charniga said Israeli sports scientist Genadi Hiskiya researched the subject and told the IWF that the optimal diameter for women’s bar should be 26mm. With a smaller diameter barbell, there will be more surface area on the thumb to supply leverage for the fingers when using the “hook grip” so can lift more.

Because 25mm is a standard dimension in the steel industry, the IWF decided to go with that diameter rather than 26mm to reduce the cost. They also went with 33-pounds (15-kilos) for the bar’s total weight. The lighter weight was necessary because many women entering the sport were challenged by the men’s 44-pound (20-kilos) bar, especially when performing the snatch lift. Although a woman weightlifter should practice primarily with the barbell used in competition, there is value in occasionally using a men’s bar.

Weightlifters can often lift as much as 10 percent more weight using straps, suggesting that the strength of the grip can be a limiting factor in the performance of the sport. Bulgarian weightlifting coach when asked what physical qualities they looked for when recruiting athletes into the sport, and he replied to the effect, “We look for small men with big hands!” Because the grip is so important, it would be wise for a weightlifter to finish off a workout with a few sets of thick-handled upright rows, shrugs, or even reverse curls to strengthen their grip. For female lifters, however, performing the two competition lifts with a men’s competition barbell is a better way to strengthen the grip as it would adhere more closely to the “specificity of training” principle.

Richard A. Magill’s textbook on motor learning, Motor Learning and Control: Concepts and Applications, discusses the concept of “transfer of learning,” which is related to the specificity of training principle. He defines the transfer of learning as “the influence of previous experiences on performing a skill in a new context or on learning a new skill.” It follows that:

Magill also states that the more similar the skills are, the greater the transfer of performance. Therefore, it would be better for a female weightlifter to occasionally use a men’s competition barbell than performing some bodybuilding movements with a stiff, thick bar that doesn’t rotate. Moreover, using a men’s bar enables a female lifter to use a motor-learning concept called Post-Tetanic Potentiation (PTP). PTP states that a more powerful muscular contraction can be achieved if the contraction is preceded by a strong muscular contraction. Let me give you a practical example.

To increase athletic performance with an elite female weightlifter, I would have her perform several warmup sets with a men’s barbell and then switch to a women’s barbell. When she uses the men’s bar, she activates more motor units than when using the women’s barbell, creating a PTP effect. When she switches back to the women’s bar for the heavier sets, those fibers are still activated. That effect, plus the increased mechanical advantage of using the smaller-diameter bar, increases her immediate gripping strength and positively affects performance. Also, the two barbells are so similar that the skills used in performing the snatch are not adversely affected, fulfilling Magill’s requirements of transfer of learning. 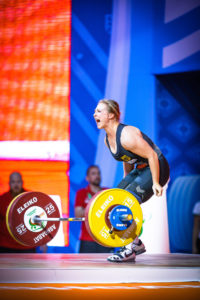 In 1997, the International Weightlifting Federation approved the use of a smaller diameter bar to help women grip the bar better and thus lift more weight.(Lead photo by Tim Scott, LiftingLife.com. This photo by Viviana Podhaiski, LiftingLife.com.)

You can apply this type of thick bar training with a set-and-rep sequence known as wave loading. With wave loading, you work up to a relatively heavy weight, reduce the weight, and pyramid back up to an even heavier weight.

One legendary strongman who used a type of wave loading was Doug Ivan Hepburn, a world weightlifting champion in 1953. He performed heavy singles in a specific exercise to activate a large number of muscle fibers, then immediately followed those sets with lighter weights and more reps. The result was that he could handle more weight with the higher-rep sets than he could otherwise.

Using a men’s bar, a female weightlifter could work up to a maximum single in a snatch or clean and jerk for her first “wave.” She would then reduce the weight — usually about 20 percent — and pyramid back up to an even heavier weight. A female weightlifter who snatches 150 pounds might perform two waves in that manner with the goal of snatching a personal record of 155 pounds or more on the second wave:

Another method, more suited to submaximal training, is to alternate between sets with a men’s barbell and those with a women’s barbell. Using the example of a female athlete with a 1RM snatch of 150 pounds, a snatch workout might be designed as follows:

An additional advantage of these thick bar methods is that they don’t require performing additional sets, as would be the case if you were doing thick-bar bodybuilding movements at the end of a session. Accomplishing the same amount of quality work in a shorter period has always been one of my goals, which is one reason my programs have proven so effective for elite athletes.