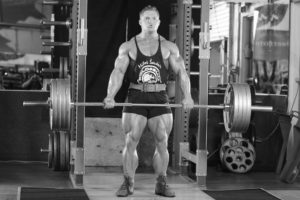 The conventional deadlift lost favor with the strength coaching community for quite some time. Instead, strength coaches focused on the power clean that worked many of the same muscles explosively and the squat to develop absolute strength. In recent years, the deadlift has experienced a “resurrection,” but in the form of many variations. I want to discuss one variation I like and one that I don’t.

First, although the deadlift is a proven strength builder, consider that many bodybuilders use it to pack on size, including two Mr. Olympias. Franco Columbu won the Mr. Olympia title in 1976 and 1981, the second after a devastating knee injury while running with a refrigerator tied to his back in a strongman competition. At a bodyweight of just 185 pounds, Columbu pulled 780 pounds, a lift that exceeded the world record and that few have surpassed to this day. Then there’s Ronnie Coleman, an 8x Mr. Olympia winner who deadlifted 800 pounds for a double.

The first deadlift variation I’d like to discuss is the hex bar deadlift, which is especially popular in high schools. Giving credit where it’s due, the hex bar deadlift is a variation of the trap bar designed by Al Gerard, a powerlifter from North Carolina. This bar has a triangle shape, such that you step inside the center of the triangle and lift the bar by grasping handgrips positioned on the sides. So, in contrast to a straight bar where the bar is held in front of the body, the resistance is directly in line with the hips. 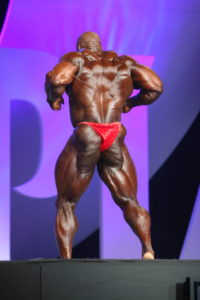 The tremendous back development of Ronnie Coleman, an 8x Mr. Olympia who deadlifted 800 pounds for two reps! (All photos by Miloš Šarčev)

One of the fears of the conventional deadlift is that the athlete will round their lower back, shifting much of the stress away from the muscles to the vertebrae and ligaments. This issue is often avoided with a trap bar as the hands are directly at your sides rather than in front of the body.

The trap bar became especially popular for developing the traps after Paul Kelso’s Kelso’s Shrug Bookwas published in 1992. Kelso made a strong case for the trap bar being superior to the straight bar for developing the trapezius muscles as the line of pull on the shoulders was directly vertical. This is one reason I like the one-arm barbell shrug, as the shoulder moves straight up and down with the weight directly underneath it.

The trap bar was good, but later came the development of the hex bar, which was better. Rather than a triangular shape, the hex bar featured a hexagon design that was easier to balance and provided more legroom.

Because the quads are strongly involved in the start of a sprint, the trap bar and the hex bar eventually became especially popular with sprinters. Championing the cause was Barry Ross, whose book Underground Secrets to Faster Running was published in 2005. In this book, Ross promotes these bars as the most practical exercise to develop leg power for sprinters and uses the example of sprinter Allyson Felix as a testimonial. In high school, Felix was called “Chicken Legs,” but Ross says she went from a 125-pound deadlift to 270 in seven months of training. Three years after the publication of Ross’s book, Felix won a gold medal in the 2008 Olympics in Beijing [and eventually won 11 medals, 7 gold, 3 silver, and 1 bronze].

Moving on, one popular exercise I don’t like, especially with heavy weights, is the straight-leg deadlift with the knees locked. When you bend your knees slightly, you will feel increased tension on the iliotibial (IT) band, a fibrous tissue that runs alongside the outside of thigh from the hip to the shinbone. When the knees are straight, the tension on the IT band decreases, increasing the stress on the lumbar vertebrae and ligaments. Also, those who perform this exercise often round their back to increase the range of motion, further increasing the stress on the vertebrae. 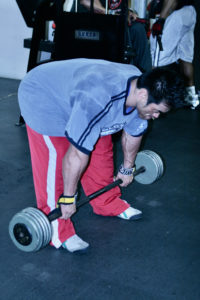 Although a straight-leg deadlift might be fine as a stretch when used with a light weight, heavy loads may be harmful to the back.

Performed with an empty bar and used as a stretch, a straight-leg deadlift will probably not cause harm (and many high school football coaches like to use the exercise with their athletes). However, with heavy loads, I believe this exercise is asking for trouble.

The deadlift is a great exercise that will always have a place in the training of Iron Game athletes, including bodybuilders, and has value for many other types of athletes. However, variations of the exercise, such as the hex bar deadlift, also deserve a place in your weight training toolbox.