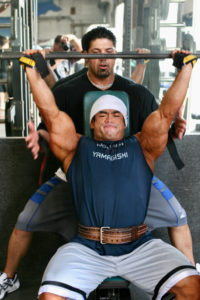 Because of the success of Russian weightlifters, many American coaches design workouts using percentages of their maximum results. While it makes sense for weightlifting, percentages are not practical, even when using high-tech software systems.

Before getting into how I determine how much weight to use for a set, let’s look at three reasons why percentage systems are ineffective:

This variation in strength levels is especially problematic during test days, as percentage systems are based upon maximum results. Using our bench press example, depending on the time of day the test occurs, the weight prescribed in future workouts can be too heavy or too light.

Another issue is that some days you simply have bad days. Maybe you cannot perform your best on test day because you didn’t get enough sleep the night before testing, ate some bad cheese, or have a minor illness? Whatever the cause, the weights prescribed based on those maxes will be too light to achieve an optimal training effect.

Even if two trainees have the same maximum result in the squat, the number of reps each can perform will vary based on each individual’s muscle fiber composition. (All photos by Miloš Šarčev)

Rather than percentages, let the repetitions determine the load for each exercise. For example, a workout for someone who can bench press 200 pounds might prescribe 5 sets of 5 reps after warm-up. After a warm-up, your first workout set might be 150 pounds. If you make all five reps, you would increase the weight for the next set; if you didn’t make all five reps, you would reduce the weight. This way, you are always performing the optimal number of reps for the specific strength training quality you are trying to improve (such as relative strength or absolute strength).

One last point — I like to give a range of repetitions for each set. So rather than 3 x 5, I might prescribe 3 x 4-6. This approach increases the total effort of the trainee, rather than having to use lighter weights on the previous sets to ensure they can reach the goal number of reps on the last set. As an example, rather than using 175 pounds for 3 sets of 5, with only the last set being to failure, the trainee might perform 180 pounds for 6 reps, 5 reps, then 4 reps.

In summary, percentage systems have their place in weightlifting, where the sport is the barbell. For those who simply want to get bigger or stronger, they should train harder and smarter by letting the reps determine the load!