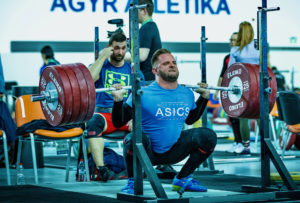 To get stronger in the squat, start at the bottom

There is little argument that the back squat is deserving of the title of King of Exercises. If you want to get bigger and stronger, the fastest way is to squat, squat, and squat some more! Beyond this simple advice, there are many specialty types of squats that I’ve found especially valuable. One of my favorites is the bottom position pause squat, and one of the biggest (literally!) proponents of the exercise is Russia’s Leonid Taranenko.

Taranenko won two Olympic medals in weightlifting, gold in 1980 (242-pound bodyweight division) and silver in 1992 (super heavyweight class). Along the way, he broke 19 world records, his best known being a clean and jerk of 586 pounds in 1988. Taranenko said he had back squatted 837 pounds with a 2-second pause at the bottom, which he performed without supportive gear such as a squat suit.

In weightlifting, athletes use the elastic qualities of the connective tissues to enable them to lift heavier weights and lift them faster. Being able to rise out of the squat quickly conserves energy for the jerk, the part of the clean and jerk that is most frequently missed in competition. Instead of a controlled tempo like you would use in a front squat with perhaps a slight rebound out of the bottom, weightlifters often bounce (or even double or triple bounce!) quickly out of the bottom position of cleans. There is value, however, in performing squats without a stretch reflex. 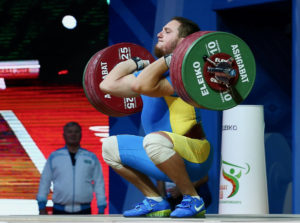 Weightlifters often bounce out of the bottom position of cleans to use the elastic qualities of the connective tissues. (Lead photo by Viviana Podhaiski, LiftingLife.com, this photo by Tim Scott, LiftingLife.com)

Pausing in the bottom position during squats reduces the contribution of the stretch reflex, creating a different type of strength-building stimulus, one that increases intra-muscular tension. Based on research using the bench press, pausing for four seconds at the bottom position releases all the stored elastic energy.

Respecting the principle of sports specificity, bottom position pause squats are best suited for general preparatory work (i.e., the early off-season). Besides increasing muscle tension, these squats emphasize the development of the vastus medialis oblique (VMO) muscle, which resembles a teardrop and is positioned on the inside of the knee. I’ve found VMO work to be essential in achieving structural balance, as the line of pull of the VMO is in the opposite direction of the vastus lateralis, which runs alongside the outside of the leg.

Having structural balance between the VMO and vastus medialis is critical for knee stability and preventing knee tracking problems that could lead to jumper’s knee (patellar tendonitis). I found it is essential to emphasize the VMO when training alpine skiers, as their sport significantly strengthens the vastus lateralis but does little for the VMO. I also use it for wrestlers, judokas, jiu-jitsukas, and MMA (especially with MMA, because often it’s not a matter of if you will get injured in this sport, but when!).

The importance of training the VMO cannot be underestimated in other sports, especially those that involve a quick change of direction, such as football. Most knee injuries in sports are non-contact, which may often be traced to inadequate knee stability. Further, knee stability is essential for achieving maximum speed. If the knees are not stable, the athlete will take longer to change direction, moving laterally or backward, after planting their feet.

There are many exercises that can be performed to correct imbalances between the VMO and the vastus lateralis. There are various forms of step-up exercises, such as the Poliquin step-up, which I often use in the early stages of knee injury. However, in working with football players of all levels, one that gets the job done quickly (along with one and one-quarter squats) is the bottom position pause squat.

Finally, the body is an especially adaptive organism, and as such, all types of squats improve faster when the body is exposed to a variety of tempos. Pause lifting is also valuable for other types of extensor-chain lifts, such as presses. If your bench press progress has stalled, try a training phase when you pause with the bar on your chest for 4 seconds. With deadlifts, pausing at the bottom (i.e., the start position) reinforces better spinal alignment, which in the long run should help your hoist more iron in this lift.

As for specific exercise prescriptions, stay within the 2-4 seconds range for the pause, use a longer eccentric contraction (usually 4 seconds), and perform the concentric contraction explosively. And because pausing increases the time under tension, you don’t need as many sets to achieve an optimal training effect. For example, if you were doing 6-8 sets of squats with a 40X0 tempo, you might reduce that to 3-5 sets with a 43X0 tempo with bottom position pause squats. Also, for squats and bench presses, enlist the help of a spotter as often the pause can take more out of you than you estimate.

After mastering the basics and getting some experience under your lifting belt, try bottom position pause squats to break through training plateaus and keep your knees injury-free.