The controversial book about the true value of exercise

As support for his beliefs that aerobic exercise is not essential for optimal health (or optimal performance in most sports), Charles Poliquin often cited Dr. Henry Solomon’s book, The Exercise Myth. His first reference was in his book, Manly Weight Loss, published in 1998.

Dr. Henry Solomon graduated from Columbia University College of Physicians and Surgeons in 1962, and his cardiology fellowship at New York Hospital-Cornell University Medical Center. In 1969 he opened a private practice in New York City and became a columnist and editor for numerous medical organizations. One of his goals was to encourage physicians to recognize the medical problems associated with obesity, treating it as a disease. 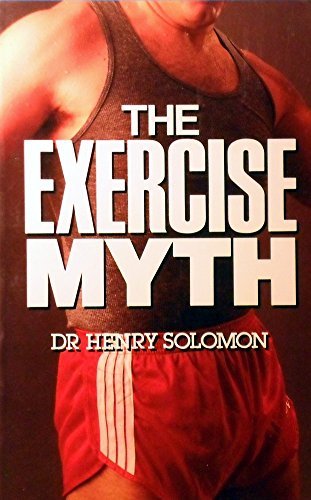 Solomon’s education and experience in cardiology led him to publish The Exercise Myth in 1984. He wrote the book for a general audience, and its popularity resulted in Solomon making appearances on mainstream television shows, including Oprah Winfrey, Donahue, 20/20, and Face the Nation. Solomon’s book also attracted the attention of Dr. Kenneth Cooper, a champion of aerobic exercise nicknamed “The Father of Aerobics,” who he debated on Nightline in 1986.

The premise of The Exercise Myth is being able to perform physical work was no guarantee of cardiovascular health and that stress tests had little value in predicting cardiovascular disease. Solomon’s ideas paralleled Poliquin, who emphasized the influence of other factors, especially diet, in dealing with the absence of disease in the heart and blood vessels.

In Manly Weight Loss and later the German Body Comp Program (2006), Poliquin wrote that many cardiovascular benefits of aerobic exercise, such as helping to control blood pressure, could be achieved with weight training. Poliquin eventually participated in several projects with Mark Houston, MD. Houston founded the Hypertension Institute in 1995 and wrote many medical textbooks on heart disease, including books for the general population about heart disease, such as What Your Doctor May Not Tell You About Heart Disease.

One incident that possibly promoted the interest in The Exercise Mythwas Jim Fixx, who died during his daily run at 52. Fixx wrote The Complete Book of Running in 1977, which sold over a million copies and was #1 on the “The New York Times Best Seller List” for 11 weeks. He frequently wrote about the health and athletic performance benefits of running and would often run as much as 10 miles in a single day while in his 50s. Fixx died the same year as The Exercise Myth was published, which no doubt contributed to him being sought after by mainstream news outlets.

Fixx’s death encouraged Cooper to write about what led to the popular writer’s death with his book, Running Without Fear, published in 1986. Cooper presented the argument that Fixx was genetically predisposed to an early death from heart disease (as his father died of a heart attack at 43), had been a heavy smoker, and was overweight before he took up running at the age of 36.

The Exercise Myth was controversial when it was published in 1984, but since then, many of Solomon’s ideas have been endorsed by the medical and fitness community. It’s a good read and one that provides insight into what it takes to live a long and healthy life.

[You can purchase The Exercise Myth by Dr. Henry Solomon through Amazon.com.)