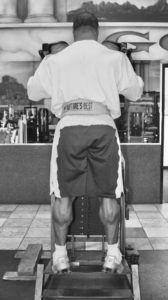 Chris Dickerson was the winner of the 1982 Mr. Olympia and what set him apart was his full, diamond-shaped calves. But if you want to turn your calves into cows, the last thing you should do is copy his training program. Dickerson reportedly only trained his calves twice a week, as he believed if he trained them more frequently, they would grow too large relative to the other muscles.

When Arnold Schwarzenegger began competing in bodybuilding, he had poor calf development but could win because of his tremendous upper body development. When he came to the US and lost the amateur 1966 NABBA Mr. Universe to Chet Yorton, a bodybuilder with exceptional calf development, Arnold knew what he had to do.

Rather than adding a few sets of calf raises at the end of a leg workout, Arnold made calf training a priority. And to motivate himself to train this muscle group even harder, he cut off his pants at knee level to draw more attention to them! The result was that he transformed a weakness into a strength. So, Arnold made calf training a priority, made his weakness a strength, and went on to win seven Mr. Olympia titles. 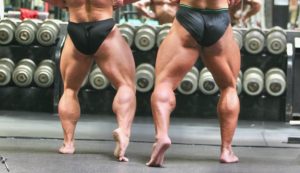 There has not been much research on calf training for bodybuilding in the scientific literature, but I found one about the influence on how foot placement targets specific areas of the calf.

In the March 2011 issue of the Journal of Strength and Conditioning Research you’ll find a research study called “Medial and Lateral Gastrocnemius Activation Differences During Heel-Raise Exercise with Three Different Foot Positions” by Bryan L. Riemann and others. Its purpose was to determine the effects of positions on calf training.

The study involved 10 men and 10 women with weight training experience: the average age was 27. The subjects performed 10 reps of calf raises while standing on a 3.81-centimeter platform, using three foot positions: neutral, internally rotated, and externally rotated. The weight used represented 130-135 percent of their body mass. Results were determined with EMG, which measures the electrical activity of a muscle.

Targeted calf training may not mean much to the average bodybuilder, especially those who don’t compete. But to reach the highest levels of physical transformation, use what science has taught us about calf training to your advantage.