Going beyond the basics to shock your muscles into growth

“Everything old is new again!” are lyrics in a popular song performed in the Oscar-winning 1979 film All That Jazz. It can also be an effective approach to overcome training plateaus. Case in point: Stutter Reps.

I was introduced to stutter reps in an Iron Man article by Bernard Centralla over three decades ago. I later learned that Miloš Šarčev believed stutter reps was a training method that would induce muscle growth when the basics become monotonous. The version I will share here involves performing isometric stops during the concentric contractions of an exercise. Not at the start or finish of a repetition, but in-between. Before getting into the details of this training method, let’s review a few concepts about loading parameters. 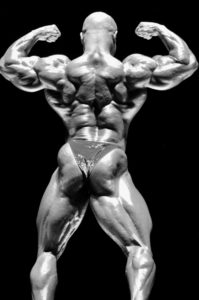 To jump start you’re your back training, give stutter reps a try. (Photos by Miloš Šarčev)

Time under tension refers to how long a muscle contracts during a repetition. A repetition is divided into three parts: concentric, eccentrics, and isometric. Let’s take the bench press as an example.

As the speed of a repetition is increased, the TUT decreases. Thus, a snatch would have a much shorter total TUT than a back squat. For increasing strength and muscle mass, slow-speed training with a longer TUT with heavy weights is superior to high-speed lifting. Obviously, an isometric contraction will create a high level of muscle tension as no movement occurs. Plus, increasing the length of an isometric contraction increases the TUT of a repetition.

I find stutter reps especially effective with chin-ups. For this exercise, and many of their variations, I favor single reps. For the concentric range, I like to prescribe 3-second isometrics stops – I typically have the athlete perform 5-6 of these stops. For the eccentric range, I will have the athlete lower the bar in 30 seconds, thus significantly prolonging the TUT for the rep. I usually recommend 5 singles. (FYI: When an individual can lower a chin-up in 30 seconds, they can usually perform one full repetition in good form.)

Yes, I’m a big believer in the basics, but sometimes, you need to “jazz” up your training to shock your muscles into growth. Stutter reps is one such method. (SS)