The Power of Box Jumping 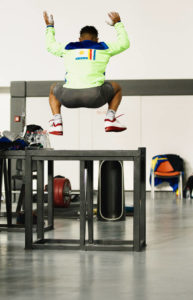 How to SAFELY incorporate box jumping into an athlete’s training

With sports played on a field, the physical quality a sports coach is often most interested in improving is running speed: how fast a wide receiver can get downfield, how fast a baseball player can run the bases, and how quickly soccer players can get to the ball. For court sports, however, the emphasis tends to switch to vertical jumping ability.

A basketball coach would be especially interested in knowing how high a player can jump vertically from a standing position, whereas a volleyball coach may be more interested in knowing how high an athlete can jump using a single- or multiple-step approach. Then there are figure skaters (and even high jumpers) who are focused on being able to transfer horizontal skating speed to the vertical. One of my colleagues tested a female skater who did a clean triple axel, but her best vertical jump was only 18 inches!

In the early days of strength and conditioning, an individual would put chalk on their fingertips, stand near a wall, jump as high as possible and touch the wall at their highest point. The difference between this measurement and how high they reach would be their standing vertical jump.

Vertical jump testing evolved into using a Vertec apparatus that has athletes jumping as high as they can and knocking over plastic tabs or, more accurately, jumping from force platforms that convert airtime into vertical-jump results. The force platforms measure in small increments, so instead of the half-inch measures from a Vertec such as 20 and 20.5 inches, you can get measurements such as 20.1, 20.2, 20.3 inches, and so on. Furthermore, such a device enables you to perform multiple jumps, which simulates the type of jumping that often occurs in rebounding and jumps with your hands at your side or jumps made while holding weights. It’s also fast – a single coach can easily test 25 athletes in 10 minutes.

There are many ways to improve vertical jumping ability. Leg presses will improve an athlete’s vertical jump, but they are not as effective as squats. Squats combined with weightlifting movements are more effective than weightlifter movements alone. One of the most impressive examples of vertical jumping ability is Shane Hamman, a former US weightlifter who once held the IPF world record in the squat at 1014 pounds, then went on to break American records in weightlifting with a 435-pound snatch and a 523-pound clean and jerk. Despite weighing 352 pounds, Hamman had a 36-inch vertical jump, could jump onto a 48-inch-high box with one step, and do a standing backflip!

In terms of non-weight training exercises for improving the vertical jump, one of the most popular methods is box jumps. This is exactly what the name implies – simply finding a box of an appropriate height and then jumping onto it. If the exercise is easy, such that you clear the box with room to spare, you can increase the difficulty by making the boxes higher. The boxes designed for box jumping are often called plyometric boxes, and they usually have a nonslip top to prevent…well, slipping.

If you want to conduct a safe box jumping program, you need to have boxes of various heights so you can warm up on the shorter ones and progress to the taller ones. Note that I said “boxes” and not “automobiles.” I say this not only because of the increasing number of jackwagons who post videos of themselves on YouTube jumping onto cars but also because a colleague of mine said that one of the best tennis players in the Air Force suffered serious injuries to his leg when he tried to jump onto the roof of a car and missed, crashing through the windshield. Again, this bears repeating: “Do not jump onto the roofs of cars!”

Motor morons aside, there is a problem when a gym owner does not have enough boxes or has boxes that are not high enough for exceptional athletes. The solution? Stack large weight plates (usually bumper plates, most likely because they have a nonslip surface) on top of the boxes! Unbelievable. But don’t take my word for it. Search “box jumping” in Google or Bing or Hulu or whatever and you will find plenty of photos and clips of clowns jumping onto bumper plates that are stacked on top of plyometric boxes. Which begs the question, “How many bumper plates does it take to do this idiot exercise?” Well, it depends upon the size of the box, of course, so some people need one bumper, some need five, and some need eight. 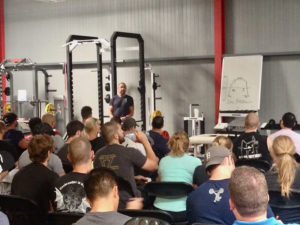 Coach Poliquin discussing the science of training at a jam-packed seminar.

The most stable boxes for jumping have a pyramid shape, as having a wider base makes it less likely to tip. The tradeoff is that such a design makes the landing portion smaller. One of the largest commercial plyometric boxes is 42 inches high, has a square base that is 21 inches wide, and has a square landing area that is 19 ½ inches wide. You can also place this box inside a wider “booster” that will add up to eight inches. Bottom line is that if you want to jump on a sturdy box with a decent landing platform, they are available in heights of up to 50 inches. Recall that Shane Hamman had a 36-inch vertical jump and could jump onto a 48-inch box, so a 50-inch box will work for at least 99 percent of the male athletes in the world and at least 99.98 percent of the women (but don’t take my word for it, as 58 percent of statistics are made up!).

With those types of numbers, the obvious reason a gym owner allows someone to stack bumper plates onto a box is to avoid the expense of buying additional boxes or larger boxes. So, if you only have 24-inch-tall boxes, the simple (and dumb) solution is to stack bumper plates on top of the platform. Need a 26-inch box, add one bumper; need 28 inches, add two bumpers. Consider that these surfaces are generally not smooth but (like those cardboard potato chips in the can) have ridges, which may compromise the stability when you jump on them.

The next thing that could happen is that the athlete doesn’t jump high enough to complete the jump. Because these bumper plates don’t interlock, it’s easy to kick one out so that the entire structure comes tumbling down like a house of cards. Although such accidents have a lot of entertainment value, after the laughter subsides, these athletes can often find themselves with something, strained, sprained, torn, or broken. Oh, and this would be a good time to mention that I’ve yet to see any of these video clips or photos in which spotters were used.

The next problem with bumper plate jumping is one of liability for the gym owner, as these individuals are not using the boxes in the way for which they were designed. Permitting an athlete to perform box jumps with bumper plates stacked on top of them could be considered negligence. I haven’t inspected every plyometric box of every company that sells plyometric boxes, but none of the ones I’ve seen so far had a sticker attached to them that said, “If this box is not high enough, we strongly recommend stacking a bunch of bumper plates on top of it.”

Finally, just what the heck are you trying to accomplish by jumping like a cannonball? To land on top of a platform that is as high as your shoulders, you need to tuck in your legs when you land. What’s the point? You are getting all the benefits from the powerful contraction of the leg and hip extensors as soon as you leave the floor – tucking in your legs does not contribute to the function of the exercise.

My suggestion? Stop pretending you’re a human cannonball, invest in the proper equipment to perform box jumps, and use the equipment the way it was intended. This will significantly reduce the risk of injuries and gym owners getting sued for allowing such a dumb exercise to be performed in the first place! (SS)