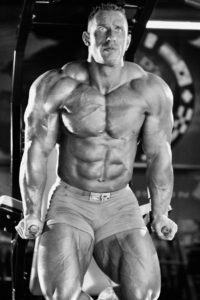 Such is the attitude of many personal trainers, strength coaches, and even those in the general fitness community. Dips are too hard, rip apart the shoulders, and are not sport-specific. This was not always the case.

In the bodybuilding world, one of the biggest proponents of dips was Vince “The Iron Guru” Gironda. Gironda trained many champion bodybuilders, including the first Mr. Olympia Larry Scott, and Vince’s Gym attracted many legendary bodybuilders, including 3x Mr. Olympia Frank Zane, Lou Ferrigno, and even Arnold Schwarzenegger. Then there were the Oscar winners Denzel Washington and Sean Penn, and numerous other Hollywood celebrities who earned him the nickname “Trainer of the Stars.”

Dips were a key part of Gironda’s workouts. One of his favorite variations was performed with a reverse grip. He would have his clients round their upper back, tuck their chin to their chest, and point their elbows out. A bit harsh for those who have postural issues or a history of shoulder injuries, but Gironda’s bodybuilders achieved success with it. 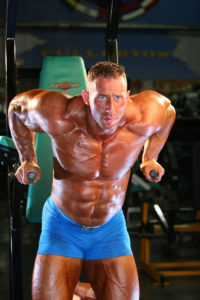 Dips are one of the most effective exercises for developing the chest, shoulders, and triceps. (Miloš Šarčev photos)

Back in the early days of powerlifting, dips were a popular exercise, championed by Pat Casey. Casey was the first man to officially bench press 600 pounds, a lift performed without the assistive gear used by many powerlifters today. Casey weighed 340 pounds but was still able to perform a single dip using an additional 380 pounds!

Early dips were often performed on parallel bars, which unfortunately were too wide for some and too narrow for others. The best type of dips bars are V-shaped, accommodating all sizes of bodies. What about dip machines?

As with chin-ups, performing dips on a machine reduces the effectiveness of the exercise, especially for the abdominals and trapezius. Also, as you progress, having resistance to reduce your bodyweight is of little value – you want to lift your bodyweight and then some. This can be accomplished with a dip belt, and some bodybuilders like to use chains that can easily be removed to enable “the builder” to pump out a few more reps. How much resistance?

Setting the standard for dips were Marvin Eder and fitness icon Jack LaLanne. A 1951 AAU Mr. America, Eder could perform parallel bar dips with 400 pounds…not once, but seven times! He also did 434 pounds for a single rep, using two men holding onto him for resistance. As for LaLanne, in 1954 he did 1,000 dips in less than 35 minutes. Throughout this entire test of muscular endurance, he did not dismount the bars.

One of Charles R. Poliquin’s favorite books on exercise science was Muscle Meets Magnets by Per A. Tesch, Ph.D., published in 1993. The name was later changed to Target Bodybuilding. In this pioneering book on the science of bodybuilding, Tesch discussed research using MRIs that found that the dips worked all three heads of the triceps. Further, Tesch found that dips were superior to many other triceps builders, such as the close-grip bench press.

Now to address the big question, “Are dips hard on the shoulders?” If someone has poor posture, particularly rounded shoulders, dips can place adverse stress on the anterior (front) portion of the shoulders. However, as evident by the countless physical education students who used them in physical education classes (especially 50+ years ago) and the competitive gymnasts who used them as a basic exercise for conditioning throughout their athletic careers, dips can certainly be a safe exercise.

The bottom line is that dips can be a valuable exercise for developing the chest, shoulders, and triceps. How about rediscovering them for your workouts? (TSS)