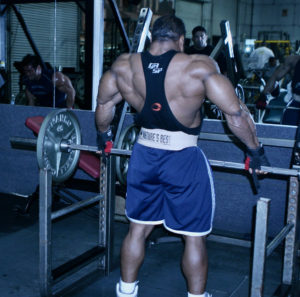 Get the look of power with this valuable exercise

The trapezius is one of the most neglected bodyparts in bodybuilding, and unless athletes are doing cleans or power cleans, it’s often neglected in athletic fitness programs. But there are many reasons it should not be.

First, it’s rather unusual that bodybuilders will add power cleans to their workouts. Many commercial gyms don’t have lifting platforms, and the stiff Olympic bars often available are rather harsh on the wrists and elbows. Also, power cleans are a complex exercise and require coaching (and a prolonged learning curve) to get much out of the exercise. The answer is shoulder shrugs.

The trapezius is a diamond-shaped muscle and contains three sections: upper, middle, and lower. For an athlete, this muscle is critical for preventing neck and head injuries in sports such as MMA, wrestling, boxing, and wrestling. Often, champions in these sports possess well-developed traps and can do an impressive “most muscular” crab pose. 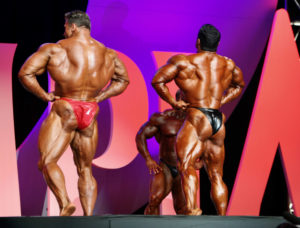 The trapezius is a diamond-shaped muscle that is prominently displayed in a rear lat spread.

Although shoulder shrugs are relatively simple, there are some important technique points to consider. First, you should always look forward during the exercise with your neck slightly retracted — you don’t want to poke your head forward or down, as one of the key benefits of the exercise is to improve posture.

Another important point is that the shoulders should move straight up and down, not rolled around. With the heavyweights that can be used in shrugs, this fault can be hard on the rotator cuff muscles.

Shrugs can be performed with a barbell held in front of you, but a trap bar or hex bar is a better option. These bars are designed so that your hands are at your sides, providing a direct line of pull for the shoulders. Dumbbells can also be used, but often many commercial gyms lack dumbbells heavy enough to give the strongest individuals a good workout.

To save time, shrugs can be performed at the end of a set of deadlifts. If performed by themselves, remove the bar from supports in a power rack or blocks as especially heavy weights can be used (often more than you can deadlift). Although Charles R. Poliquin was not a fan of lifting straps, this is one exercise he might make an exception for (but only for the heaviest working sets, not the warm-ups).

As for programming, consider that the range of motion is relatively short on shoulder shrugs. As such, higher reps should be performed.

If you’re a bodybuilder and are skeptical about how impressive well-developed traps can be for enhancing the overall look of your physique, check out some back shots of 6x Mr. Olympia Dorian Yates. While many bodybuilders could match Dorian’s physique from the front, when he turned around and hit a double biceps or lat spread, it was game over!

Having well-developed traps projects an image of strength and power. Add a few sets of heavy shrugs to your workout and look like a winner! (TSS)