Round Out Your Shoulders with Tri-Sets 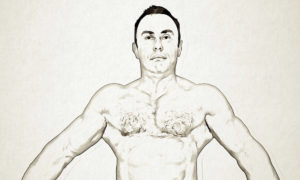 Many of his followers thought the Strength Sensei did not believe in doing any direct shoulder work. That’s not quite true.

What Charles R. Poliquin actually said was that many trainees overemphasized bench presses and incline bench presses, such that their anterior deltoids got plenty of work. For them, direct work for this muscle, such as front dumbbell raises, was often unnecessary. Instead, they should emphasize the medial and posterior deltoids. For this discussion, let’s focus on the medial delts.

One physique champion who benefited from targeting the medial delts was Larry Scott. Scott won the first Mr. Olympia title in 1965 and repeated as champion the following year before retiring. Scott had the best arms in the business, stretching the tape at 20 inches despite being only 5 feet 7 inches, but much of his success should be attributed to his emphasis on shoulder work.

Scott was born with relatively narrow shoulders, so had to develop his medial deltoids to their fullest to present a balanced physique. Likewise, female physique competitors often need additional, direct medial delt work to create the “X” pattern the judges prefer. In effect, increasing the width of the shoulders makes the hips appear smaller. When Christopher Reeve hired weightlifter David Prowse (who played Darth Vader in the original Star Wars) to get him in shape for Superman, Prowse focused on medial deltoid work with minimal chest work to enhance Reeve’s V-taper. 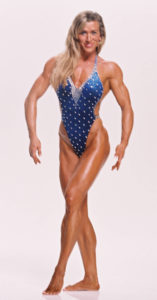 To appease the Anatomy Police, consider that despite what many bodybuilding writers claim, you can selectively activate seven portions of the deltoids, not just three. Because gymnasts apply force at so many angles, they often display full, balanced development of these muscles. From this research and empirical (real world) evidence, the Strength Sensei concluded that the deltoids would respond best to a variety of exercises.

To put his clients on the fast track to wider shoulders, the Strength Sensei would often prescribe tri-sets that target the entire strength curve of the medial deltoids. Here is an example:

Because the delts contain primarily immediate-twitch muscle fibers, the shoulders can recover relatively quickly. Thus, training them three times a week may be optimal. Using our example, after six training sessions (two weeks), the exercises and the set/rep protocols could be changed.

If building an aesthetically pleasing physique is your goal, give all three heads of the deltoid muscle the attention they deserve! (TSS)