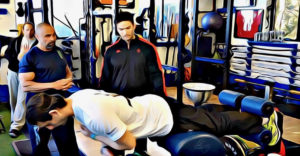 Rediscover this effective lower back exercise to improve overall strength

“Don’t throw the past away,

“We’re all gonna need it some rainy day,

“When everything old is new again!”

These are lyrics from the Oscar-winning musical All That Jazz and represent Charles R. Poliquin’s approach to helping athletics achieve physical superiority. The Strength Sensei was a student of the Iron Game. His muscle-building library, which included stacks and stacks of Iron Man and Muscular Development bodybuilding magazines, could have been featured in an episode of the television series “Hoarders.”

In researching training methods of the past, the Strength Sensei found that many weightlifting champions from Eastern European countries performed supplemental exercises for their lower back muscles. One reason is there was a standing Olympic press that required tremendous core strength, and with three lifts rather than the current two, lower back strength was critical. To deal with this stress, additional back exercises were added to their classical lifts, one being back extensions.

Unlike the heavy-duty glute-ham benches available now, back extensions were often performed with a gymnastic pommel horse and the athlete’s feet secured on a wall bar. Another distinction was that they would perform the exercise with resistance. How much weight? Consider that Vasily Alexeev, the first man to clean and jerk 500 pounds, would perform five reps of back extensions with 315 pounds! Although holding a weight plate across the chest or resting on the shoulders (not the neck!) would be fine for beginners or as a warm-up, elite athletes would place a barbell behind their shoulders.

There are many ways to increase resistance on back extensions, including resting a weight plate across the shoulders or holding a barbell on extended arms. (Left photo by Ryan Palva, LiftingLife.com)

Changing body position with an incline bench produces the highest resistance curve at the mid-range of the exercise. Also, the range of motion of the exercise can be increased by using a wider grip. To prevent the grip from being the limiting factor in a back extension when holding the bar with a wide grip, you can use straps or the hook grip (with the fingers wrapped over the thumb).

Variety was a key component of Strength Sensei’s programs. To provide significant overload to all areas of the strength curve of the erectors, back extensions might be combined with good mornings. As such, the exercises could be organized as follows over six weeks:

Follow Charles R. Poliquin’s lead and find ways to help you reach your training goals with valuable “old-time” exercises such as back extensions. (TSS)