Scrap the Ego and Focus on Form 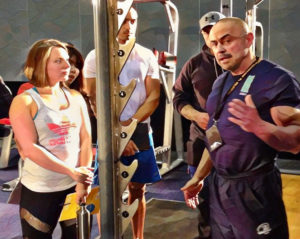 Why cheating on lifting technique only cheats yourself

Celebrity personal trainer Tony Little’s catchphrases were “You can do it!” and “Technique!” The self-proclaimed “America’s Personal Trainer” was not wrong about the importance of using the optimal technique, even if it means using light weights.

In my experience, successful athletes are not embarrassed to use light weights if they believe it will help them perform better. When I perform assessments on new athletes, I often find extreme muscular imbalances, particularly in the muscles that externally rotate the shoulders. Case in point: Professional Hockey Player Jim McKenzie.

On May 15, 1988, I tested Jim. First, consider that he weighed 235 pounds, had 15.7 percent bodyfat, and played left wing/enforcer. His fighting record for the 1997-98 NFL season was 19-1 (again, this is hockey!) He could close-grip (14 inches) bench press 280 pounds. Respectable, but when I tested him on a single-arm external rotation exercise, he could only complete 3 reps with 8 pounds. That was embarrassing.

If it gets the job done, don’t be afraid to use light weights. (Miloš Šarčev photo)

Jim put his ego aside and worked on his external rotator cuff muscles for the next three months. During this time, he did not do any bench pressing. Zero. On August 15, exactly three months later, I tested him again, and he did a close grip bench press of 331 pounds! For the next four weeks, I allowed him to do bench presses. The result? On September 10, 1998, he did 380 pounds. Oh, and as for that external rotator cuff exercise, he could complete 8 reps in perfect form with 35 pounds – not so embarrassing now!

The bottom line is that how much weight you lift is not everything. If you compromise your technique to lift a heavier weight, you’re only cheating yourself. (SS)