A trainer of champions shares his methods of preparing bodybuilding superstars

Perhaps because of financial reasons to support their “brand,” rarely do you hear about bodybuilding champions giving credit to coaches who helped them achieve their goals. After all, to sell a bodybuilding seminar, the fans of “Mr. Stratosphere” want to hear from Mr. Stratosphere, not his trainer. One exception is Miloš Šarčev.

On his way to becoming a trainer of champions, Šarčev walked the talk of a bodybuilding champion. Born in Bečej, Serbia, Šarčev was a multisport athlete who played team sports such as soccer and basketball, along with individual sports including karate, judo, and aikido. To take his athletic pursuits to the next level, he got involved with weight training and quickly became obsessed with bodybuilding. 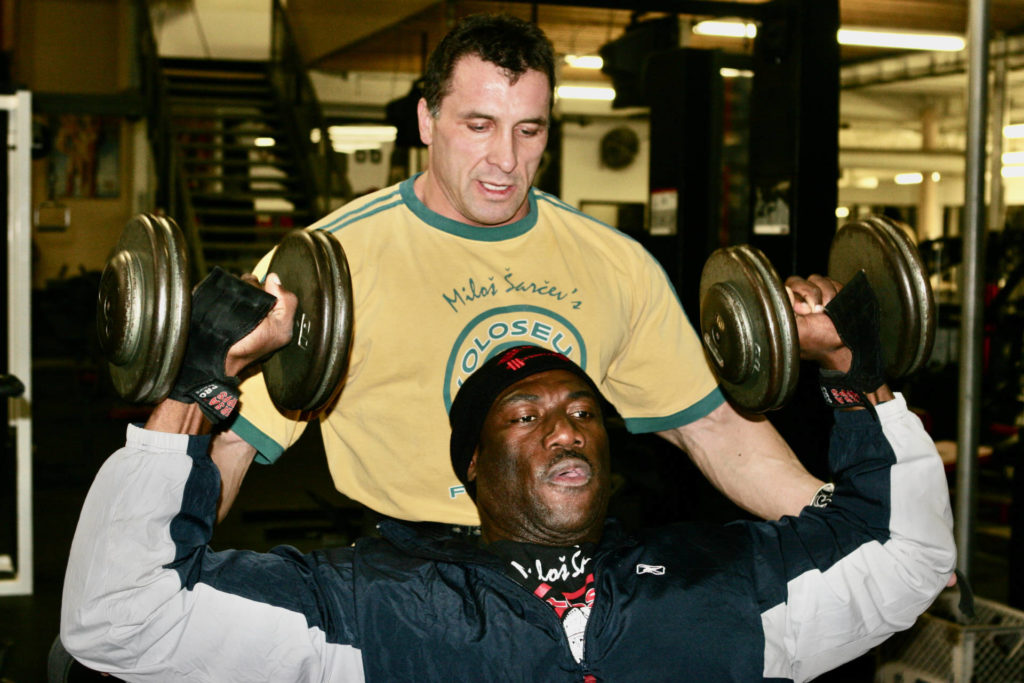 Šarčev competed over 100 times and turned pro in 1989. He appeared in the Mr. Olympic seven times, twice playing 10th. At 5-foot-8 and 240 pounds, his measurements included 21 arms, a 55-inch chest that tapered down to a 32-inch waist, and 30-inch thighs. Big, yes – but what separated Šarčev from his challengers was his symmetry. That overall presentation, along with his movie-star looks, landed him on the covers of the most popular bodybuilding magazines.

Šarčev expanded his bodybuilding influence to include seminars, one being the 2017 SWIS Convention in Ontario, Canada. The title of this presentation was Pre-Contest Bodybuilding Techniques.

Šarčev began his presentation by saying that one of his childhood heroes was Bruce Lee. Lee said, “Absorb what is useful, discard what is not, add what is uniquely your own.” This motto became the theme of this presentation.

Šarčev explained that many of the legends of bodybuilding had radically different training methods, from the high-volume workouts of Arnold to the low-volume methods of Dorian Yates. Arnold won seven Mr. Olympias and Yates won six. He said it wasn’t a case of who was right, but what worked for them. “Keep an open mind,” says Šarčev. “See if it’s logical, and if it gives you results, it’s worth doing.”

Regarding Yates, who presented the previous year at SWIS, Šarčev said he tried training with Yates but thought that there was too great of a risk of becoming injured due to the use of minimal warm-up sets. At his peak, Šarčev could squat 600 pounds for six reps and said he would need more than the 1-2 warm-up sets Yates recommended to prepare his body for such training.

One of the key points Šarčev made at SWIS was that there should be little difference between training in the offseason and the preseason. “Training that made you big will keep you big.” He also said that it’s a myth that you can’t lose fat while building muscle, and that during the preseason you must train heavy or you will lose muscle. He cited bodybuilding champions such as 2x Mr. Olympia Franco Columbu who would gain bodyweight during the preseason.

During the early preseason, Šarčev said bodybuilders need to do an honest assessment of their physique to determine what weaknesses were affecting their symmetry. For example, he said that if a bodybuilder was lacking in development in the upper middle chest, he or she should focus on exercises such as the barbell incline press with a close grip.

Throughout the 90-minute presentation, Šarčev shared many humorous stories (such as his attempt to train with 8x Mr. Olympia Ronnie Coleman who would warm up with weights that were Šarčev’s maxes!) and answered numerous questions from those fortunate to attend. One topic he covered extensively was the debate on which is better for bodybuilding, free weights or machines.

The last segment of Šarčev’s presentation was focused on nutrition, especially how to manipulate carbohydrates, and the use of supplements to give a bodybuilder an edge. He also discussed how it was essential for a bodybuilder to manage insulin levels (spoiler alert: train twice a day!).

If you’re a competitive bodybuilder and are serious about looking your best on stage, or if you just want to train like a champion, invest in a copy of “Pre-Contest Bodybuilding Techniques of Miloš Šarčev.” (TSS)