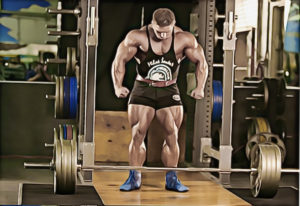 A simple trick to help you train harder and heavier

The dictionary definition of serendipity is: “the occurrence and development by chance in a happy or beneficial way.” Serendipity describes an unexpected phenomenon observed by Charles R. Poliquin when he began prescribing his German Volume Training (GVT) program. It’s a phenomenon that may help you use considerably more weight in your workouts or perform more reps.

To review, the goal of GVT is to complete 10 sets of 10 reps with the same weight for a multi-joint exercise, such as a squat or bench press. To complete all 100 reps, the weight has to be relatively light. The Strength Sensei recommended starting with a weight that you can lift for 20 reps, which translates into about 60 percent of your 1-repetition maximum.

What our founder discovered was that on the eighth or ninth set, often his clients felt stronger than during the previous set. He attributed this “second wind” to a short-term neural adaptation. You can duplicate this same type of adaptation with a brief, inter-set drop in the difficulty of a set, an approach that could be considered contrast training. Here’s how it works.

Let’s say you are performing, after warm-up, a squat protocol of 4 sets of 6-8 reps using the same weight. A rep range is used as you will get weaker from cumulative fatigue. Also, such a program is mentally challenging, because when you finish the second set, you realize you have two more brutal sets. The progression might end up looking like this:

If the third set is too challenging, some individuals may skip the last set as they may not be confident they can hit at least 6 reps – besides, they’ve done enough, right?

As an alternative, you can add a set, reduce the weight in half for that set, then go back to the original weight used on the first or second set. As follows:

Another inter-set break would be to use the same weight, but significantly reduce the reps on the third set, as follows:

Despite performing an additional set, because the load or reps is reduced briefly, you can often come back on the final sets and do more reps or, if the program calls for it, use a heavier weight. Either way, the result is that you will stimulate the body to get bigger or stronger.

Give inter-set breaks a try – who knows, you might “accidentally” get stronger! (TSS)