What Bodybuilders Must Know about the Strength Deficit 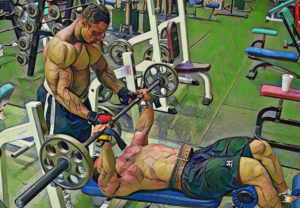 During the early days of the Iron Game, everyone trained together and often performed many of the same lifts. Reg “Hercules” Park was Arnold’s idol. He won three Mr. Universe titles and was the first bodybuilder to bench press 500 pounds. Arnold eventually managed to match this lift, along with deadlifting 710 pounds. Bill Pearl, who defeated Park at the 1971 NABBA Mr. Universe, squatted 605 and military pressed 320. Today, the muscle media seldom reports the lifts of the current champions and these athletes don’t seem to care about strength. But they should.

In the early 90s, the Strength Sensei witnessed a Mr. Olympia who could only bench press 315 pounds for six reps. Such results, among those of other title winners, gave bodybuilders the impression that you didn’t have to be strong to look strong. Charles R. Poliquin disagreed, preaching that for a bodybuilder to achieve maximum size, they needed to occasionally perform training phases that focused on strength.

The principle of specificity suggests that a bodybuilder should focus on high training volumes to maximize hypertrophy, however, such training does not recruit the fast-twitch type IIb muscle fibers. For maximum size, these more powerful fibers must be trained, and the best way is to focus on eccentric strength. 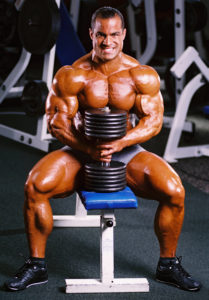 How can a bodybuilder decide how much strength training they should do? One method, according to Charles R. Poliquin, is with a muscle balance ratio called the strength deficit.

Take a basic compound exercise, such as a bench press. Using a 40X0 tempo, work up to a 4-repetition max. After the fourth rep of the last set, add 10 percent more weight to the bar. Have your training partners assist you with the concentric portion of the lift and do 2 eccentric-only reps, lowering the bar in 8 seconds. If that weight is no problem, keep increasing the weight to achieve a max for 2 eccentric reps.

The difference between your 4RM set and your maximum 2-rep eccentric set is your strength deficit. For example, if you bench pressed 200 pounds for 4RM and did 250 for two 8-second eccentric reps, your deficit is 25 percent (250/200 = 25 percent).

For a bodybuilder, the Strength Sensei believed that if the strength deficit was less than 25 percent, they should focus on eccentric strength. More specifically, he said: “Eccentric training causes more muscle damage because the load per motor unit is larger. All muscular damage calls satellite cells into action. They fuse with the damaged fibers, adding their nucleus and thus potentiating further hypertrophy. In addition, eccentric-based movements trigger a greater IGF1 release than their concentric counterparts.”

One method to improve eccentric strength is to perform slow eccentrics, such as 7-8 sets of 1 rep with an 8-second eccentric contraction. The tempo prescription for a bench press could look like this: 80X1.

Charles R. Poliquin guarantees that if your strength deficient is too small, this tempo prescription will produce intense soreness and help you achieve higher levels of muscular growth. (TSS)