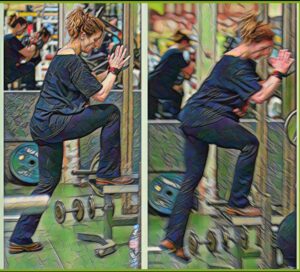 Get a Leg Up on Step-ups

Charles R. Poliquin found that many of the elite athletes he started training had one leg much stronger than the other, an imbalance that affects athletic performance and may increase the risk of injury. The Strength Sensei used many exercises to correct this imbalance, with his most popular being step-ups.

The Strength Sensei believed it was best to use a progression of step-ups to correct muscle imbalances, starting with variations that emphasized the quadriceps muscle that formed a teardrop on the inside of the knee (vastus medialis) that extend the knee and are critical for knee stability. Thus, he would often start with the Petersen step-up, then move to a conventional step-up, and then side step-ups. The side step-up works the inner thigh (adductor) muscles, which are also involved in knee stability, along with the outer quad muscle (vastus lateralis).

When muscle imbalances are corrected, the next “step” would be split squats, lunges, and squats. As a bonus, the Strength Sensei said focusing on step-ups before squats will produce better results than just squatting in the long run.