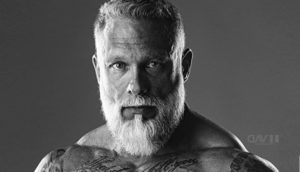 Larry founded Sculpture Physique back in 1992. He’s known for getting people in the best shape of their lives in record time, done in a safe, healthy and sustainable way. He is also known as the coaches’ coach as other fitness coaches go to him for their own training needs , knowledge, and mentorship.
He is an award winning coach with over 30 years of experience, and trained weekend warriors and athletes in all fitness categories, from amateurs to professionals (he won “FAME Trainer Of The Year Award” in both 2005 and 2006 for having the most athletes place well in competitions). He is listed as one of the best coaches on the planet by the most successful strength coach in history, Charles R. Poliquin, and was one of only two coaches that Charles would refer clients to for bodybuilding competitions (the other being the late John Meadows).
He is also an IFBB Professional Bodybuilder himself, winning the Mr. Canada title in 2012 in the Masters division, and holds a total of 5 pro cards in 5 different fitness federations (IFBB, FAME, WNSO, Musclemania, PNBA).
Larry won the first ever FAME Pro World Championship in natural bodybuilding back in 2005, making him a World Champion. He also won the 2006 FAME Pro World Championship in the couples category with Sylvia Tremblay as his partner.

He’s a professional fitness cover model landing 11 magazine covers, including the very first issue of REPS! Magazine, and Robert Kennedy’s Encyclopedia of Bodybuilding (front and back cover). Larry was the only male fitness model ever to be put under a multi-year exclusivity contract by Robert Kennedy Publications, and had his own Q&A column in REPS! Magazine.