Few American speed skaters will recognize the name of Canadian strength coach Charles Poliquin, but the athletes who strength coach Charles Poliquin has trained reads like a “Who’s Who” of the sport: Chris Witty, Kevin Scott, Christine Boudrias, Angela Cutrone, Isabelle Charest, Marc Gagnon, Sylvain Gagnon and Nathalie Lambert. As testament to the success of Coach Poliquin’s methods, in 1994 his short track athletes earned 14 medals in the World Championships.

Although he calls Calgary home, Coach Poliquin spends most of his time in Europe. He is tri-lingual, has a master’s degree in human kinetics from the University of Montreal, and bases many of his training protocols on research conducted in Germany and Norway. His programs are a result of his extensive international contacts, working not only with the finest athletes but also the most respected sports and exercise scientists.

In this exclusive interview, Coach Poliquin discusses the revolutionary training methods that enable his skating athletes to have the edge on the medal platform.

What are the primary differences between training short track and long track skaters?

CP:With short track a quicker start is more important, and because of that, these athletes need greater maximal strength. They also need to perform more plyometric drills because their stride frequency is greater.

CP:On a pound-for-pound basis, yes. On absolute levels, no, because long track skaters tend to be bigger athletes. Although there are exceptions, the typical short track male champions are about 5 feet 10 inches and 160 pounds, whereas the long track skaters are about 6 feet tall and usually weigh no less than 185 pounds.

What is the relationship between muscle mass and performance in speed skating?

CP:What we have found is that our results internationally have improved with increased levels of muscle mass, especially in the sprints. The effects of increased muscle mass are most significant on the start. But there’s an optimal amount of muscle mass for each event, and if you get too big, it hinders your endurance.

How much time do your speed skaters spend in the weightroom?

CP:In the strength building phase they train four times a week, and during the competitive phase once a week. There are also extra strength workouts during the Christmas period. Each workout usually lasts about one hour, not including warm-up. Basically, the philosophy is to get in, warm-up, get the job done, and only then make friends.

What are the best training exercises for speed skaters?

CP:For the lower body I emphasize step-ups, split squats, front squats, and back squats. For the upper body, what’s been shown to correlate best with performance are chin-ups and the incline bench press.

Do you use resistance training machines or just free weights?

CP:I limit the use of machines to about 25 percent of the load.

You’ve said that Kevin Scott can back squat, all the way down, 462 pounds. Do you also have any women speed skaters doing impressive lifts?

CP:Angela Cutrone could incline press 165 pounds weighing 128 pounds – that’s pretty impressive. Nathalie Lambert could do front split squats with 198 pounds for five reps. I remember this guy who desperately wanted to know when Nathalie trained. I asked if he wanted to meet her and he said no – he just didn’t want to work out when she did because she intimidated him!

In an article that appeared in the Skater’s Edge about the Canadian Short Track program, it was reported that you vary workouts every three weeks. Do all your athletes use this program?

CP:That model applies to probably 80 percent of my athletes.

What is the major difference between your workouts and those designed by other strength coaches?

CP:My workouts tend to have more variety in the major loading parameters such as sets, reps, and tempo.

That article also said that exercises for speed skaters should be split 50-50 between the upper and lower body. Why is that?

CP:Acceleration begins from the upper body; hence the need for maximal upper body strength. Also, skaters are often limited in their lower body exercises by the amount of strength in the upper body to support the load, particularly in the scapulae retractors. In fact, skaters from other countries are known to have developed brachialis tendonitis from supporting the bar in back squats.

What plyometric drills do your speed skaters perform?

CP:I try to make the plyometric drills specific to speed skating. Generally, we do a lot of angular work, where you train at the 45-degree push-off to imitate the stride component.

What about complex training, the type in which you superset a weight training exercise with a plyometric exercise?

I would like to do more of that – it’s a very good system. Unfortunately, the way most weightrooms are set up it’s usually not practical. Where my bobsledders train it’s possible to perform complex training, but if my speed skaters did it in the facility where they train, they’d be landing on people doing leg curls and incline presses.

Do you do anything special in regard to flexibility?

CP:Speed skaters must concentrate on flexibility of the pelvis. Because they skate primarily in one direction, most short trackers have a spine that seems to be oriented towards the curve – they look like trees that have suffered from long-term exposure to heavy winds! If we catch them early, we can alleviate a lot of that with stretching.

Do you supplement all your strength workouts with aerobic training?

CP:We do minimal aerobic work during the strength building phase.

CP:For elite athletes it only takes about 6-8 weeks to build the aerobic system, so all that’s necessary during the rest of the year is a maintenance program. Of course, your lactate threshold can improve, but as far as the V02 max is concerned, it won’t.

Are you saying that speed skaters only need to emphasize aerobic training two months out of the year?

CP:No, they are damaging to the knee.

Is insufficient resistance also a problem with slideboards?

CP:Even when there is enough overload, it’s not in the right force pattern. If you want to improve your skating stride, you’ve got to do it “on ice” with resistive devices. Towing is good for this because the coach can effectively regulate the resistance with the angulation of their blades.

How many athletes are you currently training?

CP:About 120 in a variety of sports, from judo to tennis.

How often do you see your athletes?

CP:I try to see most of my clients every three weeks. If the athlete is familiar with the exercises, once every six weeks will do.

How large is your staff?

CP:I have three strength coaches and one nutritionist who work for me.

How do coaches and athletes who want you to work with them get in touch with you?

CP:They can contact me directly, but I usually only train athletes for a minimum of three years – they’ve got to commit to three years.

With all the writing you do for various magazines, traveling, and supervising the training programs of your athletes, I guess you manage to stay fairly busy?

Olympic Champion and world record holder Chris Witty competed in five Olympics, four in speed skating and one in cycling. Her popularity resulted in her being selected as the flag bearer for the US Team during the opening ceremonies of the 2006 Games. Witty is one of the many champion speed skaters trained by Charles Poliquin. 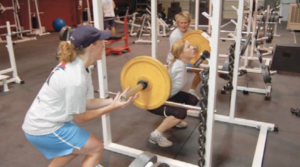 You need power quads to be an elite speed skater, and nothing beats the squat. Frouke Oonk, who has competed in the World Championships, is being spotted by Chris Witty (left) and two-time Olympian Marieke Wijsman. Photo courtesy US Speed Skating. 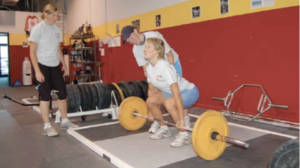 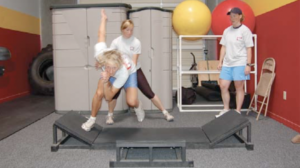 Coach Poliquin was a proponent of plyometric drills performed on angular boxes. Shown is Wijsman using a specially-designed “Plyo Ramp” station that enables this type of movement to be performed. Photo courtesy US Speed Skating.