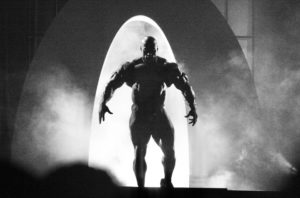 Practical suggestions to make the most of your physical potential

Many elite bodybuilders started with less-than-optimal genetics. Just look at Larry Scott, Arnold Schwarzenegger, and Frank Zane. They all overcame many physical flaws with diligent observation and by choosing the right solutions and then went on to achieve tremendous accomplishments.

To evaluate your bodybuilding potential to determine what you have to work with, ask yourself these five questions.

Larry Scott and Arnold Schwarzenegger are classic examples of champion bodybuilders blessed with long muscle bellies on the elbow flexors (i.e., the muscles that work to bend the arm at the elbow). Also, notice that bodybuilders with tremendous lat development, such as Franco Columbu, have very low insertions.

There are rare individuals who have low muscle insertions in all muscle groups. The most evident example I know of is Casey Viator, who won the Mr. America title at the age of 19. His arms were over 17 inches at the age of 17, on the first day he started training. Talk about genetics! At a height of 5-feet-8 inches, Viator’s arms eventually stretched the tape at 19 15/16 inches along with massive, 15 1/2-inch forearms (according to Nautilus founder Arthur Jones, who measured them).

How the muscle inserts affects and an athlete’s ability to display strength. It was rumored that the former East German sports establishment played with reattaching the muscle insertions of wrestlers and judokas in hopes of producing “Supermen.” The problem (again, this is just a rumor) was that the coordination of these athletes was severely disrupted. 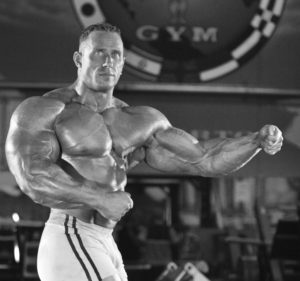 Bodybuilders with low muscle insertions on the elbow flexors possess longer muscle bellies that enable them to develop impressive arms.(Lead photo and this photo by Miloš Šarčev)

Many of the most massive bodybuilders had massive calves and forearms before they even started training. Former Mr. Olympia Chris Dickerson was born with tremendous calves and hardly ever did any calf work, yet won the IFBB’s most prestigious crown.

When I visited Dr. Dietmar Schmidtbleicher at the Sports Science Institute of the University of Freiburg in West Germany, he showed me CAT scans of subjects who had participated in a triceps-training protocol. Those with the best hormonal profiles experienced growth not only in the triceps brachii but also in the brachialis and biceps muscles, the antagonistic muscles of the triceps. Because of the subjects’ hormone levels, the untrained muscles also responded.

Those who make the best bodybuilders often have poor relative endurance; in other words, they’re the types of people who easily lift heavy weights for maximum singles. These individuals can tap into higher-threshold muscle fibers; thus, they can stimulate a greater proportion of these fibers than the high-rep types. However, this isn’t a significant factor, compared to the rest — I know many top bodybuilders who are either high-rep or high-weight types. 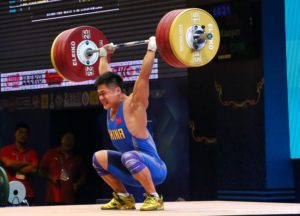 Dan Duchaine once told me over lunch that one of the reasons he thought Dorian Yates was so successful was because his cognitive processes were far superior of the average professional bodybuilder’s. Dorian approached contest preparation in a more rational and methodical manner. On the other hand, I’ve also seen some succeed who are not all that bright because they were coached by people who knew what they were doing.

Bill Reynolds, a former Editor of Muscle and Fitness, told me Schwarzenegger had such enormous drive in his workouts that he used to burn out training partners by the dozen. Fortunately, the Austrian Oak was never short of partners since everyone wanted to share his glory. You may not have the ideal genetics for bodybuilding, but if you enjoy weight training, that’s what’s most important.

As I already mentioned, I wouldn’t get too hung up on the genetic component as many very good bodybuilders had less-than-optimal genetics. Larry Scott may have been born with great potential for upper-arm growth, but his bi-acromial width (shoulder bone width) was, let’s say, not the best. Yet, with constant effort put into his shoulder training, he overcame this genetic setback and was later famous not only for his arm development but also for his massive delts.

Don’t forget that regular weight training has many health benefits with you may not appreciate now since you’re so young; for example, lowering of blood lipids and the prevention of osteoporosis. Further, there are plenty of baby boomers out there who started training five years ago who now have much better physiques than 20-year-old genetically gifted individuals who have sedentary lifestyles.