Screw It, Let's Do It 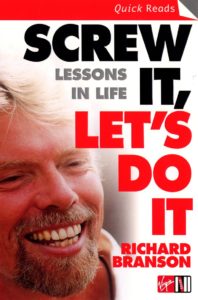 Strength Sensei Charles Poliquin would start his day by reading as soon as he woke up, often putting in two solid hours and finishing up to five books a week. One hour would be devoted to technical information such as nutrition and exercise science. The other hour would be devoted to personal growth and business building, and one of his favorite writers in both of these subjects was Sir Richard Branson.

Branson started life with a disadvantage as he was dyslexic, but by the age of 15 had started two businesses. Among his later companies were Virgin Records in 1972 and Virgin Atlantic Airways in 1980. He was knighted in 1999 and has an estimated net worth of $4.42 billion.

“Screw it – Let’s do it!” is the title of one of Charles’ favorite books by Branson, and it’s also his modus operandi. Says Branson in this autobiographic work, “If something is a good idea, my way is to say ‘Yes, I’ll consider it’ – and then to work out how to make it happen. Of course, I
don’t say yes to everything. But what is worse: making the occasional mistake or having a closed mind and missing opportunities?”

In his seminars, Charles would often share many of Branson’s success habits, showing how they can be applied to the fields of personal training
and strength coaching. Here are five of Charles’ favorites:

1. Put the Family and the Team First. Branson believed it was essential to develop a strong support network, and that the single best support network was family. “Even though I was taught to stand on my own feet, without my loyal family and friends I would be lost.” Branson owned an island in the South Pacific and in the Caribbean, and would often bring his family and friends there to help him relax and recharge.

2. Have Fun! “When it’s not fun, move on!” and “Have fun, work hard and money will come” are two of Branson’s notable quotes. Although Charles’
workouts were primarily all business, he advises his students to include fun but challenging activities in their clients’ workouts. Examples could be a tire flipping race or a chin-up contest at the end of a training session.

3. Do Some Good. Branson said, “Business people are in a unique position to do good and evoke change” and “Make a difference and help others.”
Charles followed this advice by supporting many charities and sports organizations. For example, Charles gave his weightlifting mentor Pierre
Roy $35,000 in Eleiko weightlifting equipment several years ago to help Roy with his lifting team. Charles also supported the “USA Weightlifting
American Record Incentive Program,” which gave over $30,000 to weightlifters who broke junior and senior American records.”’

4. Live the Moment. Branson said that “Money is just a means to an end, not an end it itself.” Branson worked hard, certainly, but also made it a point to enjoy his money. Branson also preached, “Love life and live it to the full,” which explains how he could break world records in two of his passions, sailing and ballooning. To motivate his clients to live life to its fullest, Charles would include bonus clauses in his letters of agreement for the National teams he worked for, offering cash rewards for exceptional accomplishments.

5. Don’t Cheat – but Aim to Win. Charles often advised his students when determining what to charge for their services that, in the words of Chester L. Karrass, “You don’t get what you deserve, you get what you negotiate.” That said, he also followed Branson’s advice to “Be fair in all your dealings” and “Never do anything if it means you can’t sleep at night.” Do yourself a favor and set aside about two hours to read Branson’s book,

Screw It, Let’s Do It. It’s a small investment that will pay off in helping you succeed in business and enjoy your life to the fullest!

[You can purchase Screw It, Let’s Do It by Richard Branson through Amazon.com. It is also available in an expanded edition.]

For more strength training and lifestyle development content, join the Dojo of Strength, which has monthly programs and articles from Charles Poliquin and our team of coaches.