Getting the Most from Bench Pressing 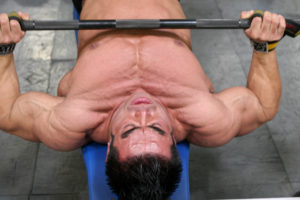 The most effective ways to use this popular exercise

In 1953 Doug Hepburn became the first man to bench press 500 pounds, and in 1967 Pat Casey was the first to exceed 600. Five years later, Jim Williams benched 675 and attempted 700. The pressing accomplishments of these men assured their place in Iron Game history. Now, thanks partly to supportive gear, such lifts are commonplace, and many men have pressed north of 1,000 pounds! But how much you press in this popular exercise, and how you press it, should be determined by your primary training goal.

The bench press can certainly be used to increase strength, but it can also be used to improve upper body mass and improve athletic performance. Further, the use of supportive gear should be dependent upon your training goal. Let’s take a closer look.

The primary goal of a powerlifter is to lift the heaviest weight. It’s not to build mass or perform it in a manner that is easiest on the joints and connective tissues. As such, they often use a relatively wide grip and an extreme lower back arch to create favorable leverage. Many also use gear such as bench shirts and heavy elastic wraps to lift considerably more weight. The effectiveness of such gear is evidenced in the significant difference between records held in the “raw” and “equipped” organizations of the sport.

If a powerlifter competes in an organization that allows supportive gear, they must train with this gear. My concern is that this gear provides a false supportive structure, compromising the muscles that help stabilize the joints. Thus, I would recommend that throughout the year these lifters perform training periods without the gear.

Football is the sport that emphasizes the bench press the most as a test of upper body strength, but it’s overrated. A study on 1,155 athletes who participated in the NFL Combine between 2005-2009 found that “the current battery of physical tests undertaken at the combine holds little value in terms of predicting draft order.” Also, the base weight used in the combine bench press test is 225 pounds, so for many athletes, the bench press becomes more of a test of muscular endurance rather than maximal strength.

For optimal sports performance, muscular development, and reduced stress on the joints, I recommend using a biacromial width on the bar during the bench press. Biacromial width is the distance between the two bony prominences on the top of the shoulder. This grip permits a greater range of motion of the chest, making it superior for hypertrophy development. I also use this grip for structural balance testing.

As a general guideline, I would limit the volume of pressing from a prone position to 20 percent and only 50 percent with a barbell. Presses performed on an incline bench tend to provide a more favorite angle of the shoulder joint in relation to the trunk. Examples include the position of the trunk during a powerful punch in boxing and the release angle during the shot put. Also, whether performed with a barbell or dumbbells, I prefer presses using thick-handled implements. 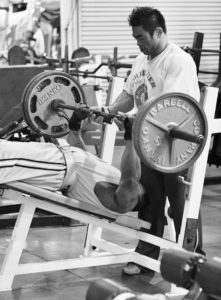 Athletes and bodybuilders should perform bench presses from a variety of angles. (Miloš Šarčev photos)

What do I think about the standing vertical press machines popular in football programs? The plus side is that because the shoulder blades are not pinned against a bench, they permit smooth scapulohumeral movement. However, they restrict the upper body into one specific movement pattern. In a sport such as wrestling, the shoulders work in various movement patterns and independently, which is one reason I prefer dumbbells to barbells.

The bench press is a versatile exercise that can make you stronger, bigger, and has specific applications to sports performance. Consider the guidelines presented here and use this popular lift to help you achieve your goals.