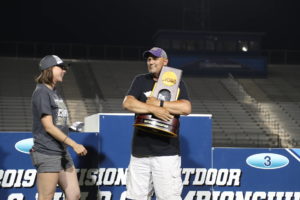 Monday, the track and field community lost a great one in Jud Logan. Logan competed in four consecutive Olympic Games and spent 28 years as a coach at Ashland University. Logan had a special connection to Charles Poliquin.

In 1991, Logan sought the help of Coach Poliquin, learning about the Strength Sensei through word-of-mouth referral of Angus Cooper, a hammer thrower from New Zealand who competed in two World Championships. Logan presented a special challenge to Poliquin.

Logan’s progress has stalled for the previous four years, and the year before had undergone hip and knee surgery. He also suffered from chronic knee pain. Few athletes would stay with a sport and make such sacrifices with no progress, which speaks volumes about Logan’s mindset. Poliquin got to work with a structural balance assessment. He changed Logan from a powerlifting squat style to a full squat with an upright torso. The result?

After six weeks, Logan’s knees were pain-free, hit personal records in vertical and horizontal jumps, and found that he could achieve better sitting positions in the hammer. Four months later, Logan broke the indoor world record in the 35-pound hammer. And he wasn’t done, representing the US in the 1992 and 2000 Olympics.

Logan moved on to coaching, settling in at Ashland University in Ohio. Under his direction, Ashland athletes won 59 individual national championships and three NCAA Division II men’s titles. He was battling B-Cell Acute Lymphoblastic Leukemia during two of these championships. In addition to five national Coach of the Year honors by the U.S. Track and Field and Cross Country Coaches Association. He was a 2002 inductee in the Ohio Association of Track and Cross Country Coaches Hall of Fame, and a 2015 inductee into the National Throws Coaches Association Thrower’s Hall of Fame.Logan died of COVID-related pneumonia at the age of 62. He is survived by his wife, Jill, and their children, Nathan, Jenna, and Kirsten. The Logan family will have a private service, and at a later date, they will announce a celebration of life event. 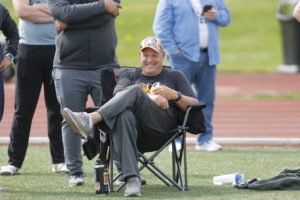