Should You Race the Pump? 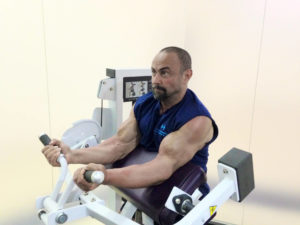 Saturday Night Live had a series of classic sketches in which the muscle-upped Austrian characters Hans and Franz (Dana Carvey and Kevin Nealon) would ridicule others for being “girlymen.” The proposed film Hans and Franz: The Girlyman Dilemma, which Arnold had an in co-producing, never made it to the big screen. However, the expression “We’re going to pump…YOU UP!” became part of bodybuilding culture. Which begs the question, “How important is the pump for building muscle mass?”

One proponent of pumping up who Charles R. Poliquin admired was Larry Scott. Scott won the first two Mr. Olympias (1965-1966). Scott’s biceps inserted closer to the elbow, giving him long muscle bellies that gave him full biceps. At a height of just 5-feet-7 and a bodyweight of 90 kilos (198 pounds), his arms reportedly stretched the tape near 20 inches.

Another bodybuilder with low biceps insertions and full biceps was 3x Mr. Olympia (1967-1969) Sergio Oliva. Oliva’s arms were legitimately measured at 20 1/8 inches by Nautilus founder Arthur Jones, which he discussed in The Nautilus Book: Volume II. Sergio stood 5-feet-10 inches and reportedly weighed as much as 245 pounds, and Jones said that the height of Sergio’s arms exceeded the circumference of his head! So, for Scott to claim 20-inch arms at his height and weight is…well, a matter of debate. 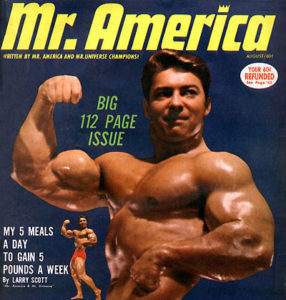 The first Mr. Olympia, Larry Scott, possessed the best arms of his era and was regularly featured on the cover of muscle magazines.

Scott was a proponent of preacher curls (hence the name Scott curls) and credited much of his development to this exercise. Likewise, Scott curls were a favorite of Strength Sensei CP, and he made certain he had several types of Scott Curl benches in his gyms.

Besides Scott curls, Scott believed a bodybuilder should use training methods that pumped up the arms quickly and that an arm workout should end when they started losing the pump. One of Scott’s favorite methods to get a maximum pump quickly was tri-sets, such as with the following workout:

Scott was a fan of what he called “Racing the Pump!” Scott believed that there was little point in continuing to work a bodypart when you started losing your pump. For this reason, he would regularly measure his biceps during an arm workout. When his arms started returning to their normal size, he would move on to another bodypart. You might consider this a variation of the “critical drop-off point.” Is there any science to pump up Scott’s obsession with the pump? There doesn’t appear to be.

According to our Strength Sensei, the highest degree of muscle growth comes from manipulating the time a muscle is under tension. He wrote that the optimal amount of time a muscle should be placed under tension for muscle growth is 40-70 seconds. In terms of reps and weights, this roughly translates into 9-12 reps at 70-78 percent of your one-repetition maximum (1RM). In contrast, sets lasting 20 seconds or less are best for building strength with minimal increases in muscle mass (i.e., relative strength). Thus, if muscle-building is your primary goal, your accumulation cycles (high volume, relatively low intensity) should focus on protocols that fall within the 40-70s time under tension guidelines.

Of course, when you follow the Strength Sensei’s loading parameters for hypertrophy, a pump is a bi-product. However, because advanced athletes need more sets to stimulate muscle growth and because additional sets will often result in a diminishing pump status, it’s unlikely that Scott’s racing the pump idea has merit (and Strength Sensei never, as far as we know, endorsed Scott’s arm measuring recommendation). That said, there is promising research suggesting that blood flow restricted training (BFRT), which intensifies and prolongs the pump, has value in promoting muscle growth. BFRT restricted training has some contraindications, especially for those with hypertension, so should not be performed without clearance from the appropriate health care professional.

Hans and Franz loved the pump, and there’s no question that effective bodybuilding protocols will no doubt forge your muscles with blood and make them temporarily bigger. Just enjoy it while it lasts, but don’t go overboard by racing the pump. (TSS)