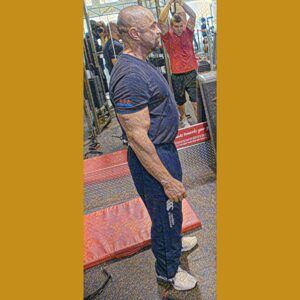 Although standard tools in today’s weight rooms, bands and lifting chains were relatively unknown a few decades ago. Then came Louie Simmons.

Louie Simmons was one of the most accomplished powerlifting coaches in the history of the Iron Game. Charles R. Poliquin visited Simmons’ Westside Barbell Club in Columbus, Ohio. He was impressed with the hardcore atmosphere of the gym and Simmons’ no-limit approach to strength training. Results? Whereas a 900-pound squat and a 700-pound bench press were rare occasions in most hardcore powerlifting gyms, such lifts wouldn’t make the Top 10 list on Simmons’ record boards.

Although many factors were responsible for Simmons’ success, two that could be pointed out were his use of bands and chains. They are particularly effective for exercises with an ascending strength curve, so you become stronger as you extend a joint. Examples include squats and bench presses. Both chains and bands increase the resistance near the end range of a concentric contraction but do so in different manners.

With chains, the resistance is increased gradually as the chains lift off the floor. Knowing that the resistance will increase as the finish of a lift encourages athletes to push harder throughout the entire lift – at no point can you slack off. However, there are several types of chains, such as those that have additional shorter chains attached near the end of the chain to significantly increase the resistance during the last few inches of the movement, where you are strongest. 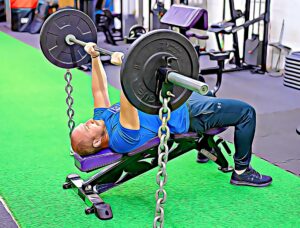 With chains, the resistance increases as the joints extend.

The Strength Sensei would also recommend a type of drop set using a combination of weight plates and chains to increase the time under tension of a set. During a bench press, for example, he would attach chains to the barbell for the heaviest set. When you reached failure, training partners would quickly remove the chains to allow you to perform several more reps. Because fatigue changes the strength curve when you remove the chains, not only is the weight lighter, but the weight will feel even throughout.

Another advantage of chains is that because the resistance decreases in the squat as you bend your legs, they encourage you to squat lower. The Strength Sensei was a proponent of squatting deep, so chains were a great teaching tool for getting the most out of his leg workout

Bands are less stable than chains, so they often require considerably longer to master than chains. Also, bands tend to cause more soreness (due to higher eccentric loading), so they should be used less frequently. Whereas chains could be used twice a week, once-a-week band training should be optimal for bands. (An excellent resource on band and chain training is Simmons’s book, The Westside Barbell Book of Methods.)

One of the characteristics of the Strength Sensei’s workouts is that they incorporate methods to make the exercises harder. Bands and chains are training tools that do just that! (TSS)